Richard and I started dating when he was in medical school. Usually, he had class in the morning and would study all afternoon, but some afternoons, he had to go to small group meetings where he would learn about the parts of being a physician that are not necessarily hard science. One example is that they had a small group (perhaps a few, actually) where they learned about how to deliver bad news and difficult diagnoses.

Most of us never have that kind of training.

I have been quiet lately partially because life has been a blur (traveling and writing and birthday and egg retrieval and dissertation defense OH MY!) but also because I got pretty worn out with constantly delivering bad news. I have received a lot of affirmation for sharing our infertility story, so I do believe it helps people. However, I was talking with some online friends in an infertility group chat recently, and we started discussing our reasons for being public (or not) about our infertility. Someone asked those of us who had been public if we ever regretted that choice. I said I did not regret it--and I do not--but this conversation was when it finally clicked that this whole experience would have been cleaner and less emotionally draining if we had a clear path from egg retrieval to transfer to baby. Instead, we ended up on the less clear, less direct path...and sharing bad news constantly is exhausting. Repeatedly getting bad news is also exhausting.

Compounding the effects of receiving and sharing bad news is that people primarily tend to share their good news on social media and keep quiet about the moments that are uncomfortable or unpleasant. There were times when I felt like every pregnancy announcement was like being punched in the face. I recently compared myself to one of those inflatable Bozo Bops that have sand or water in the bottom to weigh them down a bit. You can punch them repeatedly, and they pop back up. After a while, air leaks out little by little, and they eventually stop bouncing back up unless someone comes along to blow them back up.  No matter how cute, smart, or wonderful other people's children are, how excited I am for other people's pregnancy announcements, or how grateful I am for most of the circumstances in my life, Richard and I are on a difficult and often lonely path. Sometimes it feels like it would be easier to stay deflated rather than getting blown back up and punched some more. Clearly, we have chosen to keep getting punched, and we hope that will pay off eventually. 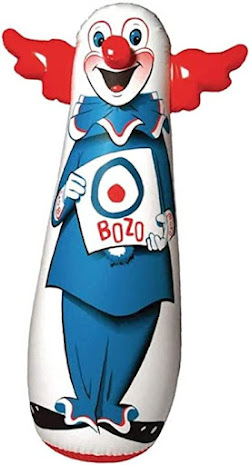 After the blighted ovum miscarriage in January, Richard and I decided we needed to take a break from fertility treatments. The arbitrary deal I made with myself is that we would not pursue any treatments until I scheduled my dissertation defense, and I mostly stuck to that deal. In May, we did the endometrial receptiva analysis (ERA) to see if I needed a different amount of progesterone before a frozen embryo transfer. This involved taking estrogen tablets and progesterone shots, then my doctor took a biopsy of my uterine lining. We had the procedure on May 20, and it was about as delightful as it sounds. Fortunately, it was quick. What was more painful than the biopsy was seeing "1-2 miscarriages" checked on the form as the reason for the procedure. Even though I knew that was the reason, seeing it on a medical form made it feel more "real." It's tough to explain.

I scheduled my dissertation defense date (June 24) on May 19, so we told our doctor at the ERA that we were ready to try to bank some more embryos as soon as possible. He said he would review our file and see if there was anything else we should check out. We were able to move forward with the IVF cycle in June. Since I have several updates, I am going to break them up across three posts. I am not sure how far apart they will be, but I will share about IVF Cycle #5 in my next post and next steps in a third post...so stay tuned.

The ERA results came back after about a week and a half. I am what they call "prereceptive," meaning I need additional progesterone before transferring a frozen embryo. I was actually kind of relieved to know that there was a problem we can do something about. Knowledge is power, after all. We do not know for sure that being prereceptive caused the chemical pregnancy after we transferred a euploid frozen embryo in October, but it is possible.

Speaking of the chemical pregnancy, today was the due date for the frozen embryo that we transferred in October. Seeing all of the babies that have been conceived and born since we started trying to conceive in 2018 is difficult, but up until this point they've been hypotheticals. "If I'd gotten pregnant in ___, we'd have a ___ year-old now." Although the pregnancy was short-lived, it was very real, and I'm apprehensive about how it is going to be to watch the babies born this month grow. This will repeat in September when the fresh embryo we transferred in December would have been due, and I imagine it will repeat for years and years to come. The due date calculator says we would meet our baby today, but that was not the case (and hopefully will not be the case - I have stuff to do before I die!)

As I mentioned, this is the first of three installments of updates. Spoiler alert: I am not pregnant. But maybe before the end of the year?

Something that made today great: Sarah's Laughter infertility support group!