A year ago, I had laparoscopic surgery to check for endometriosis. My OBGYN found and removed some endometriosis (stage 2 of 4), but what raised a red flag for him was that my ovaries weren't looking as round as expected for someone my age. With that, Richard and I took a referral to our RE, and I have since had more people, wands, and devices up in my lady bits than I would expect in a year that didn't involve getting and staying pregnant. Also, there's been quite a bit of bloodwork.

Today, we finished ovarian stimulation for our fourth IVF cycle. But before I recount the events of the day, let me back up first. Here's what a typical appointment has looked like for me at my clinic:

Today during step 6, we noticed that there were more follicles on the ultrasound, which I thought was good news after our conversation on Monday. Two more appeared on the right, and the one on the left was still there. That brought our total to six follicles.

Despite the fact that I just named ten steps, our appointments are generally pretty quick. Sometimes we're in and out in 20 minutes. I mentioned that Monday was not one of those times, but it turned out that today wasn't either. We waited in the small waiting room for longer than usual. In contrast to Monday, however, the office was not swarming this morning. So of course I let my brain take over, and I started to worry during step 7.

Then during step 8, our nurse told us we were going to have to have the conversation we'd talked about on Monday. I was a little puzzled by this since we were looking at more follicles today. I guess part of why we had to wait longer today was that our nurse and RE had to consult. Our RE came in shortly after we sat down in the nurse's office. To make a long story short, of the three options I described yesterday, Option 1 ("Go forward with the retrieval as planned") won.

What happens next, however, looks different.

Our RE told us that we might want to shift our focus to trying to achieve a pregnancy rather than trying to bank more embryos. Certainly, we'd been prepared (and hoping) for a pregnancy when we did the frozen embryo transfer in October. What he offered up was proceeding with the egg retrieval but attempting a fresh transfer next week. As the name suggests, a fresh transfer is different from the past where we biopsied and froze embryos while we waited for the testing. Financially, the choice of attempting a fresh transfer makes sense: there are extra costs (over $3000--one day I will get into the finances of IVF) involved with the biopsy, cryopreservation (freezing), testing, and storage that we avoid with a fresh transfer. We still have one euploid embryo in the freezer that's frozen in time at the age of 32, I am still under the age of 35 (a big deal in [in]fertility world), and I'm not knocking it out of the park with follicles this cycle. Our RE said this is the path he would recommend but told us to take some time to think about it.

This suggestion was a bit surprising to us for a number of reasons, first and foremost that we'd literally never discussed a fresh transfer. Also, this was the same physician who told us about a month ago that we'd need to do the endometrial receptivity analysis (ERA) before attempting another transfer. Well, that specifically meant a frozen transfer, not a fresh one. (And it's entirely possible that we missed that critical F word when we talked last month.)  To keep it simple, our RE explained that my body is already doing a lot of what we were trying to achieve with the transfer medications, and my uterus and lining look great. (My RE actually said that we have a great car and just need something in the driver's seat, hahaha.) Pending bloodwork (primarily that my progesterone stayed under about 1.5), he said we could try the fresh transfer.

Our nurse called back this afternoon to confirm that we could go ahead with the retrieval on Friday. Specifically, I would need to administer the trigger shot at 9:30 tonight for a retrieval on Friday morning at 9:30. Something different about this cycle is that we did our evening stim shots instead of discontinuing after the morning shot. I think it's because my biggest follicle is currently a 20, compared to 25+ in other cycles on the day of the trigger shot.

Looking to the retrieval, the quantitative researcher/data analyst in me wanted to detect a pattern. I took a look at my handy spreadsheet of IVF cycles and saw that we had a monitoring appointment on day 8 during our third IVF cycle. As it turns out, the six follicles I have right now look a lot like the middle six follicles I had in the third cycle. In that cycle, we retrieved seven eggs, and six were mature and fertilized. Although every cycle is different and I'm only comparing with one other cycle, this piece of information made the situation seem less bleak. What we need next is to have a higher (or at least the same) blastocyst rate than our third cycle.

So, the next few weeks are filled with possibility and lots of steps. Here are a few things we're hoping for now:

As always, please join us in hoping and praying for the best possible outcomes. 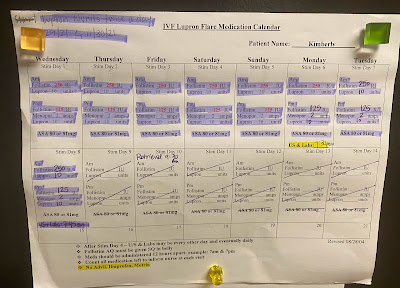 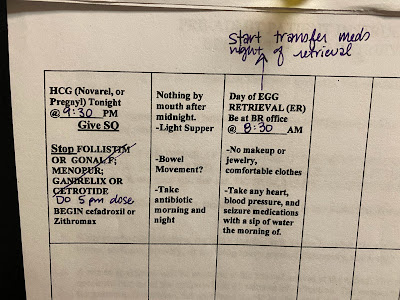 Something that made today great: More follicles + confirmation of the egg retrieval