The last few days have been incredibly busy, but I am finally making time for an update. Let's start with Friday.

After triggering on Wednesday night, the retrieval went as expected on Friday morning. We retrieved three eggs, which is what my RE expected. I'm unsure what happened to the other three follicles that were on the ultrasound (Were they empty? Was there an egg in there that just wasn't mature?) but Richard spoke with the RE after the retrieval, and Richard said he seemed satisfied. Pretty quickly, I decided that the other three were ones that would not have made it anyway and committed to thinking of the eggs we recruited as a "quality over quantity" matter. Funny enough, I heard someone at AFA two weeks ago say that "We were going for quality over quantity" is what many fraternities say after they did not have a good recruitment. (Who knew infertility and fraternities had so much in common?) I thought we had a pretty good shot at having three eggs fertilize, which would be excellent.

That afternoon, our nurse called to give me instructions for the medications we would be adding. SHe also let me know that someone would call on Monday to schedule the transfer if there was something to transfer. Friday night, we started the pre-transfer medications, which included four days of methylprednisolone, two estradiol tablets daily, and one progesterone in oil (PIO) shot daily. I was out of town on Saturday night and did my own shot, but otherwise, Richard has assumed the role of shot giver.

Saturday morning, the embryologist called with our fertilization update. I was asleep with my phone on silent, but they left a message to let us know that two of the three eggs had fertilized. While not the three I'd hoped for, I had also read that transfers of three embryos have lower live birth rates than transfers of three embryos, so I felt reasonably good about this news.

Monday was our next big milestone because I was going to find out if and when we would have our embryo transfer. Typically, the nurse calls with updates between 2:00 and 2:30, so I didn't worry much in the morning. To an extent, I am getting better at not worrying since these things are out of my control, but I still worry sometimes. Our nurse didn't call until 2:54, so the minutes between 2:30 and 2:54 were not particularly peaceful for me. Even knowing (and personally witnessing last week) that Monday can be a busy day at our clinic, I started to worry that we had nothing to transfer, and our doctor would be calling after 4:00 with bad news. (Our RE is the one who delivers the bad news.) When the phone rang at 2:54, I was somewhat relieved to see our clinic's name instead of our RE's name, and I was more relieved when I heard my nurse's voice on the other end...but I was still quite nervous. However, she let me know that we had one embryo to transfer and that I should show up at the clinic at 9:45 am on Wednesday with a full bladder for a transfer at 10:00 am.

I asked our nurse if we just had one embryo, and she said, "For now," which I was unclear if that meant, "Your one could go away," or, "Your other one might catch up and be sufficient for transfer." I decided not to inquire in case it was the former--less to worry about.

In the same way that fraternities that had a low turnout during recruitment tout the "quality over quantity" line, something said often in [in]fertility world is, "It only takes one," which is true. The question is will this be our one, and that remains to be seen...but we certainly hope so. I feel at ease about the procedure, and I am surprisingly not concerned about the fact that our embryo(s?) will be untested before the transfer. Hopefully my body will take over, and we'll have amazing news in a few weeks. That's the dream anyway! 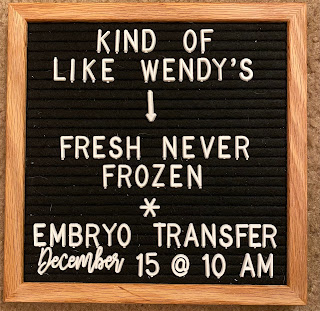 Something that made today great: I got a few responses to my dissertation recruitment e-mails!