It's been two weeks since my last update, so I guess it's time for another one.

When I left off, I'd just gotten the news that my first beta result was 25, which was a gray area, or "a little pregnant." This was not the news we'd hoped for, and despite wanting to not stress out all weekend, I stressed out all weekend. On Friday night, I took a home pregnancy test for the experience of seeing what a "little pregnant" test looked like. Something just felt wrong all weekend. I met my friend Megan for late lunch/early dinner on Sunday afternoon, and I could barely eat. On Sunday night, I decided to try another test, and the second line on the test--the one that separates the "pregnant" from the "not pregnant"-- was all but gone. In two short days, our pregnancy faded away. The test from Sunday is still sitting on my bathroom counter with the second line barely there; it is simultaneously a reminder that I was once pregnant and a reminder that I'm not pregnant anymore. I probably need to throw it away.
After consulting with another friend who's had a failed transfer, I decided to message my nurse and ask if I could come in for bloodwork on Monday instead of Tuesday to save myself the waiting and the progesterone shots I would have needed if the pregnancy has been viable. This is probably a bit dramatic, but I felt like I was on a death march. My nurse responded early on Monday morning, and I went in at 9:00 for the bloodwork. 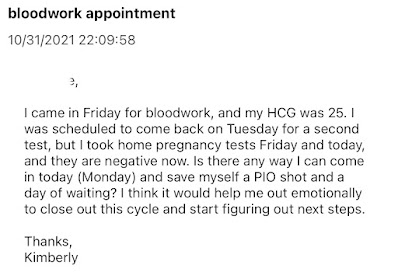 The nurse called Monday afternoon to let us know that my HCG had dropped to 5, which is considered negative. She told me I could discontinue the medications I was on and wait for my period to start. Looking to the future, she said that before we attempted another transfer, my doctor wanted to do an Endometrial Receptivity Analysis, or ERA. There's more information on this website, but to put it simply, I will do a mock transfer cycle (complete with the meds and shots) but not actually transfer an embryo. Instead, they'll take a sample from my endometrium (uterine lining) to see if we actually timed the transfer correctly, if I need more days of progesterone, or if I need fewer days of progesterone. Looking at the calendar, that meant that another actual transfer before the end of the year was not in the cards.
For those keeping count at home, though, the other issue is our number of euploid (normal) embryos: we're down to one. Regardless of when we do the ERA, we knew we'd have to make a decision about whether to go for another retrieval or try to transfer the second embryo. This was something we wanted to discuss with our doctor, but we also wanted to take some time to process what had just happened and what was about to happen. We called back on Wednesday and scheduled a time to talk with our doctor on Friday.
Meanwhile, I had to decide whether I wanted to cancel my plans to attend the Association for the Study of Higher Education (ASHE) conference in San Juan, Puerto Rico. I wanted to go, but I was nervous about what would come next. Ultimately, Richard agreed to travel with me, so I canceled my flight, booked a new one for both of us, and scheduled Scooter for boarding. I also made the decision to go ahead and tell my supervisors what was going on. Truthfully, I'd been minimally productive at work since Friday afternoon's news--I completely threw in the towel and took Monday afternoon as personal time--but my supervisors were supportive and encouraged me to do whatever I felt I needed. I tried (with mixed results) to do what was critical and put everything else on hold.
After I learned that I was going to miscarry, I thought a lot about what that would be like in an unfamiliar place compared to in my own home. I pictured myself bleeding and sobbing while I wondered if the baby had come out yet. Regardless of where it happened, I realized it was going to be rough. Even the fact that I could prepare for the moment felt strange. I've reflected a bit, and I think it was better to know what was coming than to be caught off guard. I worried that it would be painful, too. It was like a different version of the same death march I had been on, but at least there was an end in sight.
I started bleeding on Thursday. While I found myself wondering if I'd just flushed what could have been our child down the toilet, I never cried. It was slightly more painful than my regular periods, but I managed the pain with over-the-counter meds. I was oddly at peace, and I truly think it helped that so many people have been praying for us. I also appreciated the change of scenery and the fact that Richard was there with me.
We talked with our RE on Friday morning about next steps and determined that we would go for a fourth retrieval before attempting another transfer. Despite everything we've been thrown this year, Richard and I are still hopeful that we will be able to have children using my eggs and his sperm. Our doctor had several anecdotes about couples going through IVF and then getting pregnant naturally, which is a lovely thought but one that feels completely out of reach at this point in our process. With our desire for multiple children and only one normal embryo in the freezer, another retrieval seemed to make the most sense. I'm not getting any younger. So, we're at the beginning of IVF cycle 4.
Coming home from the conference was a bit of a challenge. I have felt very left behind as we continue down this road. I'm also learning that I feel the best when I am totally distracted. I want to think about conferences, work, and anything but [in]fertility. I don't have the energy or emotional bandwidth to work at the level I would like, but I've mostly been working until I'm tired enough for bed. This is effective for me in most ways, but I also realize that there is now a volatile can of emotions just waiting in the wings to explode. Below is a picture of me presenting some of my dissertation research (as research-in-progress) at a [different] conference this week. I think I look happy and proud. I love my dress, and my hair and makeup were on point too, despite the number that the New Orleans humidity did on my curls. But when I zoom in on my face, I see how tired I look and how much hurt is in my eyes. I have tried to bury this immense grief because I can't shake it off. The best I can do is suppress it. 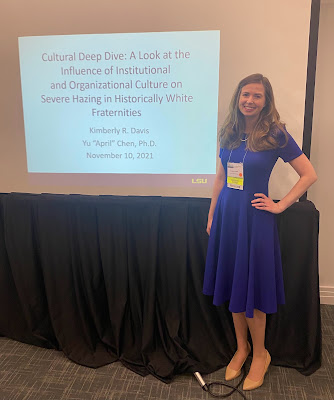 Despite my sadness, there are several positive things that I can say about all of this. The failed embryo transfer and chemical pregnancy have absolutely affirmed the strength of my marriage and the dreaminess of my husband. The years of trying have been difficult, but this year especially so. Richard assures me that he's going to love me no matter what, and we're going to get through this. Even if I already knew all of that, it's good to hear again. Similarly, I have felt lots of love and support from friends and family in the form of Facebook messages, Facebook comments, text messages, and calls from family and friends. There are so many people who have offered sympathetic thoughts and words of encouragement while I've been down in the dumps. I'll also give myself a little bit of credit and state that even though I don't feel fully like myself, I'm pretty darn strong, tough, and resilient...and that's pretty cool.
So, time marches on, and we're moving forward with it. I picked up a Nuvaring from a CVS in San Juan last Friday, and our fertility medications will deliver on Tuesday. I return to the RE on Friday for an ultrasound and bloodwork, and I think we'll get our calendar for this cycle at that appointment. I never thought I'd be a repeat IVF-er, but my hopes are high for the upcoming cycle. Please remember us as we prepare for whatever is next.
Something that made today great: I had a lovely dinner out with family tonight.
Time I woke up: 9:00 am
Posted by Kimberly R. Davis at 11:50 PM