Right after my transfer, I posted on social media that I was Pregnant Until Proven Otherwise, or PUPO. Today, beta day, was the day I could drop the UPO and confirm pregnancy. As I have said repeatedly, nothing—especially a live birth—is ever guaranteed with IVF, but today’s beta test was the next step along the journey.

I was a few minutes late for my 9:15 blood draw, but there was nobody else in the waiting room. I was called back shortly after I sat down. The draw was quick, and they told me they would call with results in a few hours. The clinic closes at noon on Friday, so I figured I would not have long to wait. I watched the clock and was not very focused on my work. At 12:14 pm, my doctor called. He asked if it was a good time to talk, and I told him I needed to go wake Richard. When Richard was ready, our doctor told us that my beta was 25, which is a gray area. It’s lower than desired at this point, but I am technically pregnant. I tried to put a positive spin on the situation by saying, “Well I’m more pregnant than I’ve ever been,” which my doctor agreed was true. The next test (because of course there’s a next test) is to see if my beta is at increasing. So, I go back on Tuesday (14dp5dt) at 7:45 am to see what the situation is. The expectation is that the beta should double every 48 to 72 hours, which would mean I hope to be in the 60-100 range by the next test. Sometimes it takes babies a little longer to get going, which I totally understand as someone who’s not an early riser and is tough to get going. (For those who are wondering, when the issue isn’t just being slow to grow and the levels fail to rise, this becomes what is known as a chemical pregnancy—this article covers the topic. I’m not ready to discuss this possibility.) In the meantime, we hope, pray, rest, and try to be happy.

Upon receiving this news, I had two reactions at the same time. As I reflected on them later, I had to laugh at how graduate learning has molded my way of thinking but hasn’t made me completely stop flying off the handle when I initially receive disappointing news.

Reaction 1 (the more dramatic one – skip over this one if you’re not one for colorful language):

Everything I ever learned in the public school system about pregnancy was fucking bullshit. It’s not as simple as “pregnant” or “not pregnant.” How the hell can a sperm can fertilize an egg, and a person could still not be pregnant? Fuck the entire system and all of the structures that fail to educate people about how to take control of their fertility and just tries to scare people out of having sex. I hate everything.

The more I learn, the more I realize how much I don’t know. I can learn a lot from this experience. How can we more adequately define pregnancy (or are we already doing the best we can)? I thought this would be a simple “pregnant” or “not pregnant” situation, but it’s more of a dimmer switch than a light switch you flip on or off…and it’s looking pretty dim right now. I was never guaranteed a viable pregnancy, and I will not be guaranteed a viable pregnancy even if the beta does increase, so really I would have been waiting for the next thing—whatever that was—regardless.

Truthfully, I knew in my heart that being PUPO really meant being a little pregnant. I had lunch with some friends last Sunday and opted for a mocktail with my meal since I was PUPO. I explained to them that the sperm had fertilized the egg, and the embryo was in my uterus, but we were waiting and hoping it would implant and grow. Saying that aloud and typing it just now does truly feel ridiculous. In a poll, even of educated people, I think most people would agree when the sperm and egg meet and are in the uterus, a person is pregnant. There’s so much we take for granted and expect bodies to do when in fact, it’s difficult for some bodies.

The good news in all of this is that we now know I am capable of becoming pregnant. I have wanted this and hoped and prayed for it for years. Another thing I’ve learned from (a) graduate school and (b) working in positions where I had to hold young people accountable is that you have to ask the questions you’re actually trying to get an answer to. As I’ve asked and dreamed of being pregnant, I didn’t specify how pregnant I hoped to be. I have learned to pray for a viable pregnancy ending with a live birth, but I never said anything about betas. So really, I got what I asked for. In the future, I’ll ask for high betas.

I’ve been jamming to Tom Petty and James Taylor tonight, and Tom Petty says in “The Waiting” that the waiting is the hardest part. I’m not sure that’s exactly true, but it’s definitely a part. Please remember us and pray for us through this next chunk of waiting time. 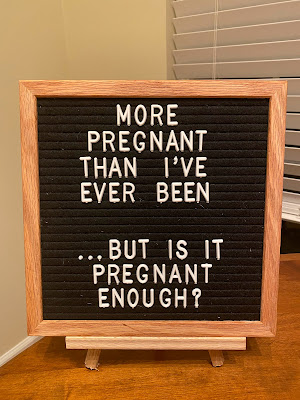 Something that made today great: The higher education student association had a mix and mingle on Zoom today that was pretty fun!