With just a few minutes left in September, we are now eagerly looking to October. It's Richard's birth month, but it's also (hopefully) our FET month! It's been a bit since I have made one of these boards, so I'm a little rusty. But... 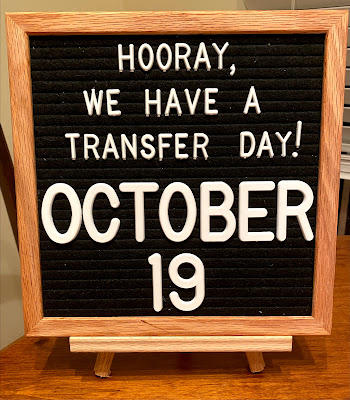 At our appointment today, we got a new calendar complete with an anticipated transfer date of October 19 and a schedule of medicines (and medicine changes) to follow until pregnancy test day on October 29. I fell into the birth control/Lupron lull and forgot to stop taking birth control last Thursday, so I had two extra days of birth control. Fortunately, things still look fine, and I am going to pay closer attention to this schedule. Starting tomorrow, I'll be decreasing my Lupron from 10 units to 5 units daily and adding estrogen and baby aspirin to the regimen. I'm still two weeks out from the infamous progesterone in oil shots, but I'm currently so excited to be approaching a transfer that I'm not worried about big needles or thick oil going into my rump. 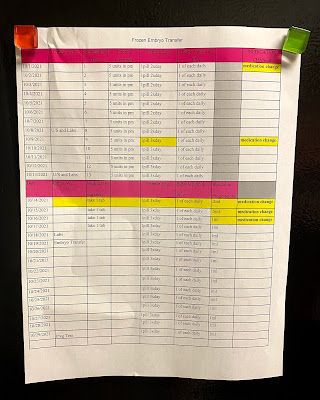 As much as I have worried and wondered about IVF in general, I really hadn't thought about the steps leading up to a transfer. It's definitely more complicated and lengthy than I anticipated, but if it gives us a better chance of a pregnancy and live birth, I'm all for any process. I have plenty to keep me busy over the next few weeks, so October 19 will likely be here before I know it! We also have two more appointments on October 8 and 13 for bloodwork and an ultrasound, so that will break up the waiting. Our focus will be following the schedule between visits and hoping that my reproductive system keeps looking the way it's expected to.

Here are some outtakes from making my letter board. When I lived in Natchitoches, Papa's Bar and Grill sold their Big C burgers for $4 on Tuesdays. One night, I went with some of my co-workers, and Susan convinced Mary Bess to order some 1 lb burger. Mary Bess agreed, though I don't think she ate the burger in one sitting. I completely forgot about it until I couldn't find my big "C" letters, so that was a fun memory. I then found not one but two big "C"s on my other letter board. 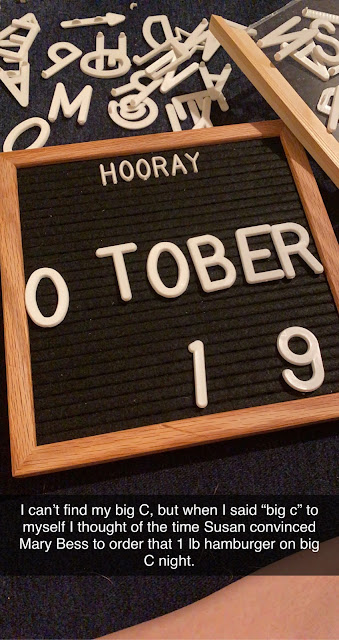 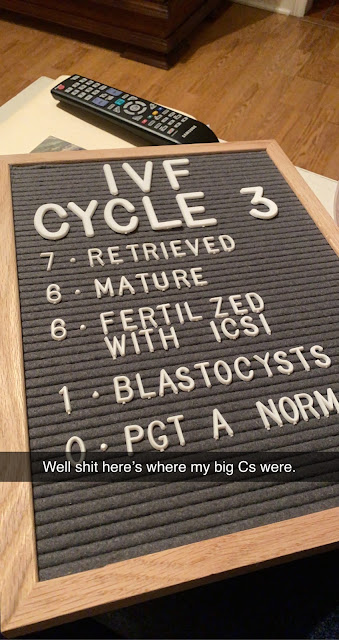 Something that made today great: Taco Thursday/lunch catch up with Jennie today!

I last posted after our first intrauterine insemination (IUI). IUIs have about a 15% success rate, and my RE was willing to try up to three of those. All three failed, which was not surprising but was a bummer. September is a tough month to not get pregnant because it means I won't have a baby before my next birthday (assuming a full-term pregnancy), but it was easier this year than the last few. If not when I'm 30, 31, 32, or 33, maybe 34...maybe.

After the third IUI failed, we talked with our doctor last Tuesday (9/7) about what was necessary to move forward with a frozen embryo transfer, or FET. We're now on our way!

As with my retrieval cycles, the first step in preparing for the FET was to take birth control. So, I started that last Tuesday. Since we are working with a limited number of precious euploid embryos--two to be exact--we want to take plenty of precautions to hopefully have a pregnancy that results in a live birth. Last December, I had laparoscopic surgery to check for endometriosis (and remove it once it was found). When we first met our RE in January, he explained that the laparoscopic surgery would buy us about six months before we would have to worry about the endometriosis returning. For those keeping score at home, it's been nine months since the surgery, so my RE wanted to check out my uterus for a status update before we went for a transfer. To do that, he recommended a saline infusion sonohysterogram, which is a fancy way of saying that he would inject some saline into my uterus and then look at it on the ultrasound to make sure everything was good. We did that this morning, and I rolled into the clinic in my traditional "This is terrible. Keep going" T-shirt and my good luck/friendship/happiness charms that I bring to almost every appointment: a friendship token from KT and a little squirrel from Cate. I held tightly onto them during the procedure. I have not had many issues with pain during the various procedures over the last few years, but this one was definitely the most uncomfortable of anything I have done so far. Not painful, but definitely uncomfortable. Fortunately, my reproductive system looked "very normal" according to my RE, so we are moving forward. 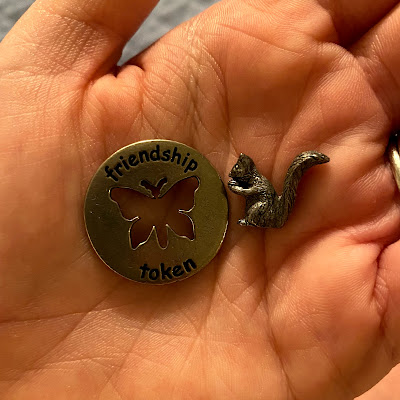 Tomorrow, my medications will arrive, and we'll be back to injections of Lupron. This is a different kind of Lupron from what I have had before, and we'll do it twice a day for two weeks. I'll discontinue the birth control pills next Thursday, and the Thursday after that, I'll go for an ultrasound and labs. Eventually, I'll start injections of progesterone in oil, or PIO, which is famous for being thick and requiring a large needle...cool. Pile it on top with the other medications, supplements, and procedures. Ha.
Preparing for the FET is exciting, but I do feel more pressure than I did with the IUIs. If the first FET does not take, we will have to pause and decide if we want to try for another retrieval (or retrievals) or transfer the second one quickly. If the first one fails but the second one works, we would be out of euploid embryos, and I would be older. For now, however, I am doing my best to not think about that. Right now, we're going to give the first FET our best shot (no pun intended).
I'll probably be mostly quiet between now and our next appointment on the 30th, as there will not be much to update. 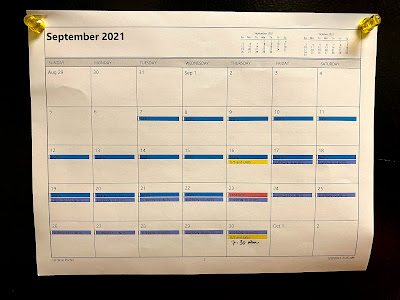 Something that made today great: I had a dissertation homework party with Catherine and Diana, and it was so nice to catch up! (And we got our homework done!)