Six days after the egg retrieval, the embryology lab calls to give an update of how many of our embryos made it to the blastocyst stage. The statistics tell us that 30-50 percent of fertilized eggs make it to this point, and I always do the calculations to project our next outcome as soon as I hear a new number. With 6 fertilized eggs, we'd expect 1.8 to 3, so 2 to 3. From there, fewer than 50 percent of embryos are found to be normal/euploid.

In our first two cycles, we fell where expected with the number of blastocysts we could test. Our first cycle had one out of four (25%) fertilized eggs make it to blastocyst, and our second cycle had three out of seven (43%). Based on our history, I never doubted that we would have at least two to test from the third cycle, which would hopefully give us one more normal one in the freezer. Then, we could start preparing for our first transfer.

Instead, I was caught completely off guard when the embryologist called yesterday morning and said we had one ~beautiful~ embryo that was sent off for testing. She was so excited about how beautiful the embryo was, which is not something I had heard in our first two cycles. All I could think about was the next calculation--fewer than 50 percent--and what that meant for our one embryo. Then I thought about the last time we had only one embryo and how that turned out: one highly aneuploid.

I said before the retrieval that hope was what we were left to do when we have done everything else. After the retrieval, I talked about how releasing control (relaxing) also releases anxiousness. I will at least acknowledge that hoping and relaxing helped me with the waiting period between our fertilization and blastocyst updates. Part of the point of shifting my focus to hoping and relaxing was that we had done what we could do and could no longer change the outcome, but I guess I lost sight of that somewhere. I let myself believe that hoping and releasing control would bring the best possible outcome when what I needed instead was a reminder that anything that happened would not make our results better or worse.

I have struggled with the news since I first heard it. When we had one blastocyst in our first cycle, I hoped so hard that it would come back normal, and instead, it was mostly abnormal. I know that every cycle is different--I tell myself that all the time--but I am so afraid of the same outcome. There is nothing I can do to change the test results, so I just have to wait, hope, and try to relax. The sample should have been shipped off today, and we expect to hear something in 7-10 business days. Right now, that feels like a long time.

I'm in an ugly cycle of feelings as I continue to process another cycle with one blastocyst. I try to be grateful and remember that there are families who have no blastocysts, no fertilized eggs, or even no eggs retrieved at all. The fact that we have made it to the blastocyst stage each cycle puts us ahead of many people who struggle with infertility. There are families who only get one shot at IVF because of the financial burden, and others never attempt IVF because they would have to sacrifice too much to afford it. Our savings and student loan repayments have taken a hit, but we are okay.

At the same time, I find myself helplessly frustrated and angry about how unfair this all is. When I started seeing my therapist in early 2020, she introduced me to the idea that infertility is a version of grief. Every month, I was grieving what I thought my life and family would look like. I started seeing a therapist after we'd been trying for nearly two years, and Richard and I were both worn out with the monthly routine of being brought down by crying spells. It was exhausting for me because I was going through it and for Richard because he couldn't do anything to fix it.

We started trying to conceive when I was 29 years old. If someone had told me that I would be sitting in my house with my 33rd birthday approaching, and there would be no nursery or child's bedroom because there would be no baby or child, I don't think I would have believed them. The upper limit for when I expected to have a child was 31; 33 and never been pregnant was nowhere on the radar. June is a particularly challenging month with infertility grief because it's the month of our wedding anniversary and my birthday. Something about wrapping up another year of marriage and life without "solving" the infertility problem is discouraging. I feel the same way in December when the holidays are upon us and we wrap up another calendar year still hoping and waiting. It doesn't stop there, though; March and September give me similar feelings as I put pressure on myself because, "If I'm not pregnant this month, I won't be pregnant before my birthday/this year."

I'm trying to give myself some grace and permission to feel all of the feelings that emerge in this process. After all, that's the kind of advice I give to other people when they're going through anything difficult. I often tell people I'm there if they need to talk, scream, yell, or cry, but I'm not the best at taking my own advice. I'm working on that too and am so appreciative of the friends and people who remind me that it's okay to own my feelings.

My little letter board reminds me that we have one more update to come, and the news could always be good. It's entirely possible that we will find out we have another euploid blastocyst. After all, our embryo is beautiful! However, I can't help but wonder what happened to our other five and how we were dealt this unpleasant hand. Earlier today, I expressed to Richard how outraged I was that we only had one blastocyst when the numbers predicted two or three, and Richard reminded me that we were only off by one. I try to be gracious when he is right or brings up a valid point, but that one stung.

My goal is to stay hopeful about the future, thankful for what we have, and distracted from wondering what our next result will be. Easier said than done, but I am trying! 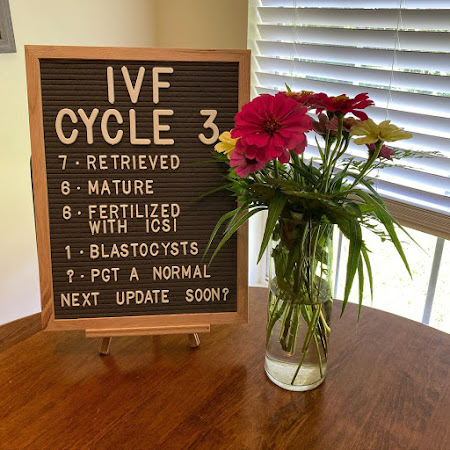 Something that made today great: Taco Tuesday at Blue Corn...yum!
Time I woke up: 9:30 am