Note: I'm actually posting this on CD 22 / Stims Day 6 because I ran out of time yesterday.
Wow, it has been quite a week! The IVF cycle is going about as expected; we are accustomed to the routine now. Monday was a bit of an adventure because I had to fly with my medications, but that was much less dramatic than I expected. I purchased a small cooler bag for the trip, and TSA was more concerned about my ice pack than the actual medications or needles. Thanks to a flight cancellation on my layover, I got to experience taking medications through security not once but twice! The first time was at MLU (Monroe Regional Airport, the birthplace of Delta Airlines!), and the second was at DFW (Dallas/Fort Worth, an American Airlines hub that is much larger than MLU), and both were remarkably easy. Perhaps the highlight of the adventure was doing our Monday evening injections in the car as Richard dropped me off at MLU on Monday. I was fortunate that I did not have to do any in an airport bathroom or onboard an aircraft thousands of feet in the air, though that could have been a fun story.
I was traveling by plane to retrieve my car from my sister-in-law's house in Houston. With flooding in south Louisiana last week (where I drive to get back to Baton Rouge), we were unsure about the road conditions along my route. I had several appointments (including an RE visit) Wednesday and Thursday (5/19 and 5/20), so I opted to fly out Tuesday night (5/18) and left my car in Houston. What started as a quick trip to retrieve my car turned into an overnight adventure. My friend Blake was kind enough to offer me a place to stay at his house in Fort Worth, but a Lyft was going to run me $137.99. (OMG!) So many people were stranded that there were no Ubers available, and hotels started filling up as I refreshed the booking website. Blake ended up coming to rescue me (fortunately!) and dropped me back off the next morning after I moved my rebooked flight from 4:35 pm to 10:25 am.
I was supposed to go back to my RE's office on Wednesday morning, which would have been day 4 of stims. Unfortunately, I was pretty beat down from my travels after waiting on the runway for over two hours and having our one-hour flight extended to two hours. I calculated that by the time I made it back to my sister-in-law's house, it would be nearly 5:00 pm. With that in mind, I called my RE's office about moving my appointment to the afternoon, and my nurse said I could come on Thursday (day 5) instead of Wednesday. Phew!
Adding to my travel woes, I cut a turn too short and hit a curb on the way out to my appointment yesterday morning. This resulted in me blowing two of my tires...YIKES. Richard was staying home because he did not feel well, so I had him come pick me up, then I took him home and headed to my appointment.
After all of the obstacles and drama that tried to stand between this appointment and me, there was at least some good news: eight follicles are growing! This cycle, my right ovary is taking the lead, which is what the antral follicle count (AFC) on last week's ultrasound predicted. On day 4 of stims during our second cycle, we had 7 follicles, and 10 appeared by day 6 of stims. Based on the last cycle, it is possible that we will see a few more follicles at our next visit. We will go back on Sunday (day 8) and find out for sure. I am happy about 8 for now, though. 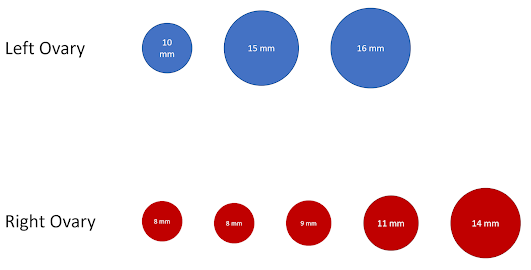 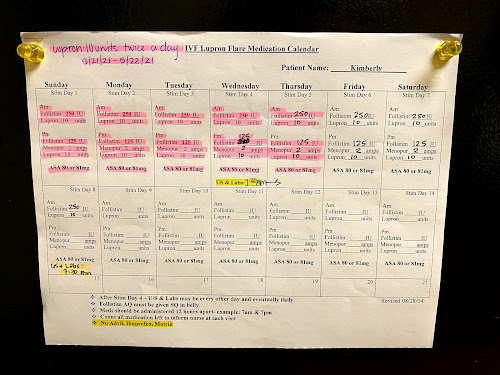 Something that made today great: I submitted revisions to my IRB application for my dissertation research
Time I woke up: 8:30 am