Yesterday, I drove up to Bossier City to attend a bachelorette party for my friend Megan. This was my first time transporting fertility medications and doing my injections somewhere other than my house, and everything went fine. We had a great time hanging out, eating, laughing, and playing games. Although Megan offered to let me sleep over (and I’d packed a bag in case I needed to), I ended up driving home late last night because I felt up to it and didn’t want to have to wake up and drive. For those unfamiliar with Louisiana geography, it’s roughly a four-hour drive from Baton Rouge to Bossier City. That meant that I had lots of time in the car. I filled some of the time by catching up with friends, and I listened to the Fast Times at Ridgemont High soundtrack a few more times. I also threw some podcasts into the mix.

When I tired of the Fast Times at Ridgemont High soundtrack (yeah, it finally happened), I decided to look for a new Spotify playlist to try. I love a good playlist, but I am not great at building them myself. Last week, I discovered 70’s Road Trip and liked it, so I tried my luck for some comforting tunes by searching for “Infertility.” There were a few options to choose from, but I went with the first one I saw since I needed to be watching the road.

The playlist was called “Infertility Warrior,” and it contains several songs that I sort of expected. It’s also heavy on Christian/worship, which I don’t mind. I like a lot of praise and worship music. The second song on the playlist is Laura Story’s “Blessings,” which is a song I like but had sort of forgotten about until I had a Facebook status with some of the lyrics in my memories a few weeks ago. The chorus goes,

As I listened to the song last night, I found that I was not comforted by the lyrics as I had been in the past. All I could think of was my struggle with infertility. I said to myself, “I already know God is near. I don’t need tears, pain, or sleepless nights. This is pointless.“

Then, the next song was “Scars” by I Am They, which was a new one to me. It’s similar to “Blessings” but takes it to another level:

Again, as I thought about my own pain, I couldn’t identify with the song in the least. I can think of a lot of things I’d trade to stop having to deal with infertility, and I’m absolutely not thankful for the scars. Even when I try to stretch my mind to think, “How will God use this experience for His glory?” the best I could come up with was, “I can use my words and my story to encourage others if they go through this.” But what if God just eliminated infertility altogether? What good does this struggle do for anyone other than help other people going through this seemingly unnecessary disease?

I felt myself growing upset at the singer and the song, and then it hit me: I’m angry. On Friday night, I was texting my friend Willie, and she offered her support if I needed to talk, cry, or be mad. I responded, “Thank you. I am mad and crying, but I’m eating pasta which is happy.” That was the first time I’d admitted that I was mad, but I let the feeling pass.

When I coached for Girls on the Run, one of my favorite lessons was on emotions. Rather than framing emotions as “good” or “bad,” the GOTR curriculum encourages us to think of emotions as “comfortable” and “uncomfortable.” Infertility has brought out a number of uncomfortable emotions in me; sad, disappointed, and hurt are a few that I have allowed myself to feel over the last few years. Then there are other uncomfortable emotions that I prefer to repress: jealous, bitter, and angry are the big three. When I think of words to describe myself, “angry” doesn’t make the list. I want to be known as intelligent, passionate, and driven. I want people to think of me as a kind and dependable friend they can call upon. Being angry doesn’t align with who I am or who I want to be.

Thinking about the “Scars” song, my life has been relatively easy; I have few true scars. I count losing my dad to cancer as a scar, but every other trial I have been through seems more like a minor inconvenience or setback. Most of my unanswered prayers have been related to schools I didn’t get accepted to or romantic relationships that didn’t work out. After everything played out with those situations, I was grateful that I didn’t get what I wanted, but this feels different. None of those dragged out for years or challenged me like infertility has, and none of them have made me this angry.

Initially, I also worried about being angry with God. In the back of my mind, however, a small voice reminded me of something I heard a long time ago. I don’t remember if it was in a sermon, a devotion, or even a casual conversation, but I was told once that it’s okay to unleash our anger on God. He can take it. As I was pulling back into Baton Rouge around 2:00 am last night, I allowed myself to speak the words aloud: “God, I am angry.” My eyes immediately filled up with huge tears. Normally when I’m about to cry, my eyes water a little bit, but last night was more like a flood. On one hand, I felt like a weight was lifted by finally saying out loud how I am feeling. On the other, I am still angry. It still hurts. It’s going to hurt for a while.

While I was inclined to resist these uncomfortable emotions, I am now allowing myself to feel them--not permanently, but at least for the moment. Better to embrace it now than let it fester into something worse. Meanwhile, we have an ultrasound and bloodwork tomorrow morning to see how things are progressing in my ovaries. Hopefully, we'll have news that leads to comfortable emotions rather than uncomfortable ones. 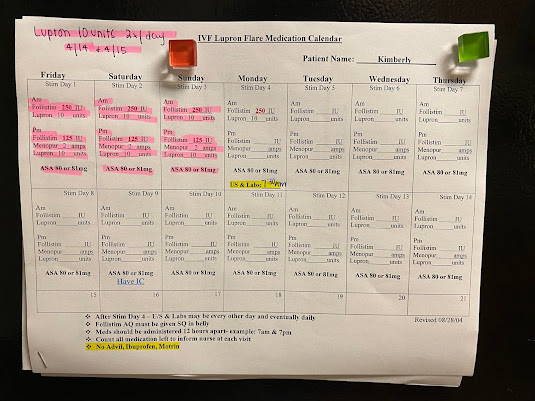 Something that made today great: Sleeping in with no alarm!