During my first semester in my Ph.D. program, I took an educational statistics class, ELRC 7006. This is a required class for my program that trips many students up initially, though we all manage to get through it in the end. One of the worst feelings I ever had in ELRC 7006  was following the second quiz. I had spent hours preparing for this quiz by watching videos, reading the textbook, and doing practice problems, yet I stumbled over several of the questions. For one multiple choice question in particular, I stared at the answer choices and could not find one that seemed right. I finished the rest of the quiz, went back to the question, and still could not identify the correct answer. Finally, I picked an answer choice and turned the quiz in.

The next week, my professor uploaded our quiz grades, and I’d made a 100. In disbelief, I e-mailed him and asked if I could stop by his office to review my quiz because I was sure I had missed at least three questions based on the number of guesses I made. He agreed, and when I got to the question that had taken so much of my time during the quiz, I asked how I should have known that my choice was the answer. His response?

“Oh, the correct answer choice got cut off by the copier, so everyone received full credit for that question.”

I had a similar experience today where the answer I received was not among the options I had considered.

After receiving no news yesterday, I called my RE’s office this morning to ask about an update. They left a message for the IVF lab, and I received a call back a few hours later that the results had been ready on April 8, and my doctor had called me that day. The person on the phone couldn’t share the results with me but said she would have my RE call me.

My RE called a few minutes later, and he said he’d called and left me a message on the 8th. I have no idea whom he called or who received the message, but my call log and voice mail both indicate that it wasn’t me. Our one embryo was found to be “high-level mosaic,” which means that between 40 and 80 percent of the cells were abnormal. (Read more about mosaicism on this page from my fertility clinic.) While the research around mosaic embryos is emerging, the rate of viable pregnancies and live births is not encouraging.

For the last two weeks, I have been so focused on whether our results would be “normal” or “abnormal” that I completely forgot about the other options in between. I thought the PGT-A number would be the end of the line, but now we have an embryo sitting in the freezer that we will likely never implant. In some ways, it feels worse than if we had a completely abnormal embryo. I'm also really frustrated with the communication mixup that led to waiting an extra week for an update, but in retrospect, it's probably better that I did not receive the news the day before my dissertation proposal meeting. That's a silver lining. 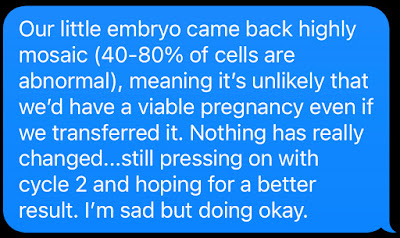 As I told everyone I texted, I am sad but doing okay. (If I didn’t text you, I’m sorry!) It’s been a weird night including the following activities:

I guess the takeaway from all of this is that running and baking cakes will help me not cry. But not too much running (as discussed extensively in prior posts) and probably not too many cakes either unless I find enough people and places to pass them off. The frequency of my visits to the Diaper Bank is limited by donations; I am not going to recount the inventory just for fun!

On a serious note, this is going to hurt for a while. The timing of this news as we're injecting extra hormones into my body (today is the first day of stims for our second IVF cycle) is less than ideal, but we're rolling with the punches. I'm resisting the urge to crawl into a hole or even just my bed. As I've heard about grief so many times, "The only way out is through." As my shirt that I wear to all of my appointments says, "This is terrible. Keep going."

We knew this was not going to be an easy process. We are still glad we decided to go forward with this IVF cycle, as we would have always wondered what might have happened. Another valuable lesson is that I can make embryos. My RE explained that some (perhaps many?) patients who have AMH levels under 1 do not have follicles that turn to eggs that fertilize. We made it through all of those stages, so we just have to keep trying for a cycle where we "wake up" more eggs. My mind wants to jump to questions like, "How many cycles will we do this?" but I'm trying to stay grounded. If the trend continues, it's going to take a lot of Led Zeppelin's "Kashmir" (which is NOT on "Led Zeppelin IV" despite what the film might lead you to believe) and other related tunes, but we will make it through this next step. 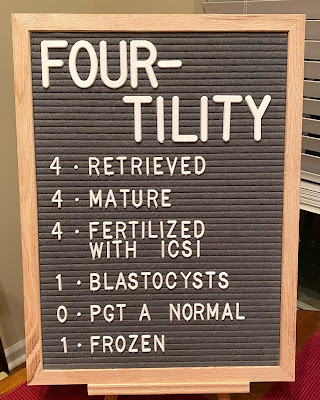 Something that made today great: My run tonight was encouraging.