Speaking broadly, couples do not tend to end up doing IVF because the journey will be easy for them. Beyond the attrition I described in yesterday’s post, there are numerous places where a couple can hit a snag in the process. In our case, the first snag was this morning.

During my ultrasound, the same four follicles I had on Monday were still growing. My 10, 13, 17, and 18 had become 14, 18, 21, and 23. Shortly after the tech measured my follicles, my RE came in and said it looked like I was ready. At first, I thought, “Wow, I’m such an overachiever! We’re ready! Go ovaries!” As I mentioned last night, however, we don’t want the follicles I have to get too big. To prevent that from happening, we would need to administer my trigger shot to let my ovaries know it’s time to release the mature eggs. (This website explains more about the trigger shot.) This also meant that unless I have a follicle hiding undetected (as opposed to hiding detected?) somewhere, the most we will be able to retrieve would be four. Keeping the attrition I discussed last night in mind, that does not leave us with much to work with, statistically speaking.

With so few follicles, one option was to cancel the IVF cycle and switch to intrauterine insemination (IUI). IUI involves placing sperm directly into the uterus, but it relies on the sperm finding the egg. The fertility clinic offers a little assistance for the sperm by “washing” the semen sample and picking out the best sperm. (Our RE explained it as “the ones wearing tuxedos” which still makes us laugh.) Before we knew how few eggs I had, we’d planned to try IUI anyway. Since we hope to have more than one child, however, we chose to pursue IVF once we knew the egg situation. As we weighed options today, we determined that the primary pro of doing IUI over IVF is the financial savings. IUI costs much less because we skip the costs involved with retrieving eggs, having an embryologist create and monitor the embryos, testing the embryos, and freezing anything we do not transfer. If the cycle ends with no genetically normal embryos, we are out a considerable amount of money for a learning experience. On the other hand, IVF ensures that the sperm and egg find each other, and testing the embryos decreases the likelihood of miscarriage. Also, if luck is on our side, we could end up with multiple normal embryos!

Our RE asked Richard and me to discuss our options and told us he’d give us a call back this afternoon and let us know how the bloodwork looked. Another piece of the puzzle is the estradiol (estrogen) level; our RE explained that for mature eggs, estradiol should measure around 200-250 pg/mL per follicle.  Thrilled that we had eggs at all, much less four, Richard was supportive of going forward with IVF. We also discussed that if we converted to IUI, we might always wonder what would have happened if we had done IVF instead. I agreed, and with that, we decided that we wanted to do IVF unless the bloodwork indicated we absolutely should not.

After I changed out of my fertility clinic outfit (one of two “This is terrible. Keep going.” shirts I ordered from the My Favorite Murder store and jeans), ate breakfast, and dropped Richard off at home, I headed into work. For some reason, I really wanted to listen to “Set It Off” by Boosie on the way to work. I don’t know most of the words, and some of the words offend me, but it felt really good to ardently scream the lyrics I do know as I drove to work in my grandma car. I liked it so much that I played the song on repeat until I arrived at work (which isn’t that many times, but still).

When our RE called around 1:30, he reported that my estradiol reading was 1550 pg/mL, which averages out to about 388 pg/mL per follicle. Richard and I shared our thoughts about going forward with IVF with the RE, and he said he understood our reasoning. He wanted to speak with the other physicians about a plan to trigger, but he said a nurse would call later with instructions.

About an hour and a half later, the nurse called and told me that we would trigger tonight at 9:00 pm and come in Friday morning at 8:00 for an egg retrieval at 9:00. She reminded me of the instructions for the trigger shot and told me to discontinue my stims. Whereas I thought I had two to eight more days of stims, everything changed today. I’m not exactly sure when I expected to stop stims and trigger, but it certainly wasn’t today. I spend a decent amount of time reading infertility and low AMH/DOR Facebook groups, and I see people post about how they have been stimming for days. I thought I would be a bloated hormonal mess for ten days to two weeks, but I’m just a little bruised up and tired. I’m not complaining, though. 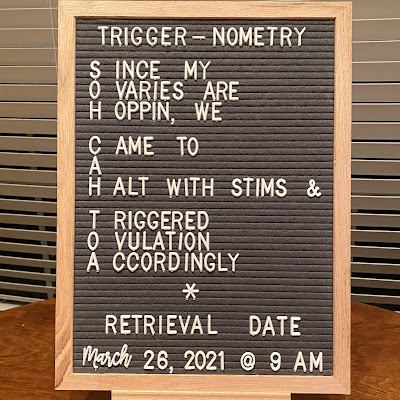 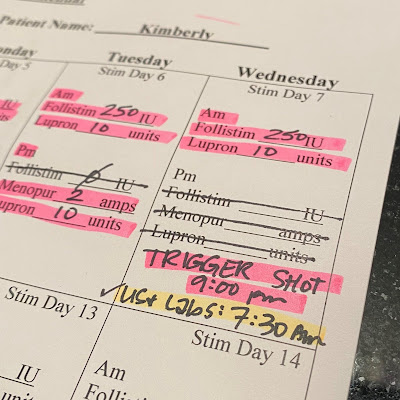 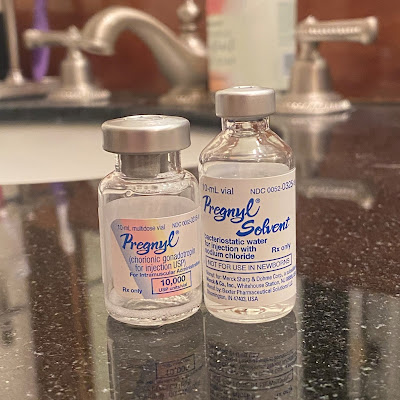 We did the trigger shot as planned at 9:00, and it was not a huge deal; we are accustomed to injections now. I am doing my best to stay in the moment and focus on preparing for the best outcome from this cycle. Primarily, that will mean more rest and less stress tomorrow before the retrieval on Friday. I have to remind myself that we are still in the game, and the estrogen levels are indicative of mature eggs. When my mind drifts to the future and I start thinking about how we’re likely to need another round of stims and retrieval before we can transfer, I have to pull myself back to the present. We are so thankful to be covered in prayer and well wishes as we press on through IVF. It makes the whole experience feel much less lonely. 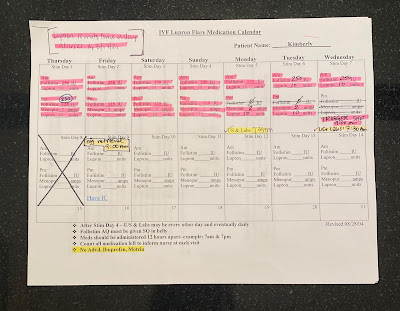 Something that made today great: Richard has been referring to the follicles as “chonks” and “chonky boiz,” and it’s making me laugh pretty hard every time he says it.