Today was the first day of the full deal of injectable medications. In IVF world, that's known as ovarian stimulation, or "stimming." Richard worked last night, but he FaceTimed me at 5:00 am so I wasn't alone for my injections. (Scooter was still asleep.)
I had a pretty busy day today between work and other tasks I needed to manage. I had class on Zoom from 4:30 to 5:30, so Richard agreed to prep everything for the PM injections and bring the supplies to my desk. My plan was to turn off the camera but still try to listen to class.
Richard opted to do Follistim first. As he was actively injecting the piece of belly I'd chosen, I asked, "This is 125?" The rest of our conversation went something like this:
R: No, it's 250. Right?
K: I don't think so. I think it's 250 in the morning and 125 at night.
R: I thought it was the same both times.
K: No, I don't think so.
R: Shit.
K: Shit.
Richard went to the back of the house and came back with the calendar in hand. It was indeed 125 at night. After the Menopur (which has a bigger needle and burns a little bit but still wasn't *too* bad) and Lupron, my next move was to text our RE. I lovingly threw Richard under the bus but was not actually mad at him. 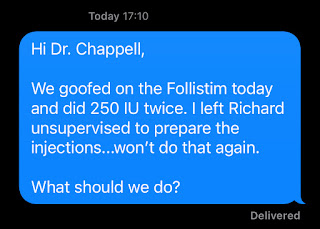 My RE returned my call within a few minutes and eased our worries. The good news is that it's not really possible to overdose on Follistim, but I jokingly said I wouldn't mention that to Richard because he's not much on moderation with anything. My RE reminded me that it's an expensive medication--the most expensive in our collection by a long shot (pun not intended)--so it's best not to overdo it. However, a little extra Follistim at the beginning is more likely to provide a boost than cause harm. That was reassuring!
It feels as if we might need a variation of one of those workplace accident signs to hang in the bathroom that reads, "____ days since our last medication error," but hopefully we won't have any more of these. I do not have any more class meetings until April 8, so we should be able to check each other's work in the future.
Also, I think it bodes well for us that we were good grown-ups and asked the doctor what we needed to do rather than having an argument or playing blame games. Richard really is the dreamiest. Fortunately, it was a minor error and we have laughed about it several times since, but who knows how I might react in a few days when I'm deeper into these hormone injections? Hopefully, we won't find out.
Something that made today great: Fantastic weather following yesterday's storms!
Time I woke up: 8:30 am (I go back to bed after my injections are done)
Posted by Kimberly R. Davis at 11:25 PM