I was quiet for a week, but that is mostly because I did not have much to report! The Nuvaring was pretty much a nonevent, but I did get really tired on Thursday afternoon and took one of those deep naps that feels more like mini-hibernation than a nap. I tried to blame it on the Nuvaring, but that's probably unfair. We received our medicines on Friday, and Richard and I went to my RE's office today for another ultrasound, more bloodwork, and instructions for what to do with each medication.

Things are progressing as expected, so we will start injections tomorrow! They have to be done every 12 hours. Richard will be home to help with both tomorrow and Wednesday, but I'll be on my own for one shot per day once his workweek gets rolling. (Unless I want to show up at his work for an injection...ha!) I could tell he was a little nervous about this when he first saw me try on the practice pad, but my technique improved. 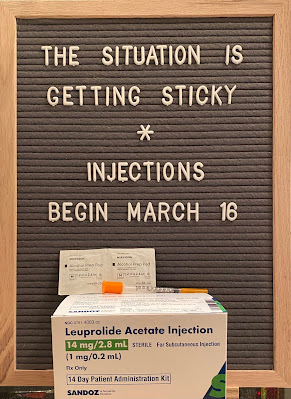 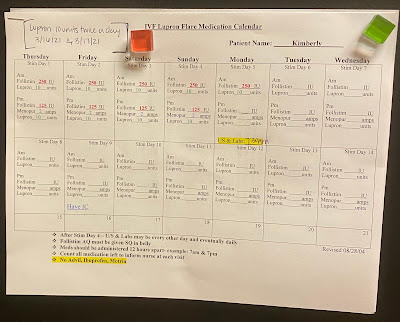 A few people have asked how I'm feeling, and so far, the answer is that I'm excited! I am happy to have an action plan and be moving forward. There are about to be a number of additional hormones in my body, so the future is unpredictable, but I am hopeful for now. Meanwhile, I'm doing what I can to keep consuming lots of calories. Highlights today included a whole bag of Trader Joe's potstickers and 2/3 a pint of Ben and Jerry's Netflix and Chill'd.

Also, I have noticed from Instagram that having a letter board (see above) is all the rage, so I bought one. Thus far, I have found that sorting and arranging the letters on the board is actually pretty calming. Richard helped me think of something clever to say. As a treat to myself for doing a good job thinking about giving myself injections, I ordered additional letters (big ones and cursive ones!) for future board decorating.

Something that made today great: Waking up with no alarm