Richard often makes fun of me because I make friends everywhere I go. My friend Ken is one example; I met him back in February after I told him he was doing a good job on the out and back section at the Mardi Gras Mambo 15K. Later, I happened to see a post-race photo on the Red River Road Runners Facebook group, and I commented that I saw him at the race. Within minutes, we were Facebook friends, and we ran together for the first time about a week later.

Ken started running in 2019 and caught the race bug quickly; he racked up several half marathon finishes in a matter of months. After races started going virtual, Ken helped me meet several of my goals. Then, when he decided to run the Louisiana Marathon 2021, I offered to train and run with him.  We slogged through some hot and humid summer days. We knew where the porta potties were on our regular running routes.

Over the last few weeks, we have been running longer than he had ever run before. One week we did 15 miles for our Saturday run, and two weeks later, we upped it to 16.  This semester was a bit of a nightmare (hence my blogging silence, but that's not what this post is about) but our training made me get out and run a few days a week. Ken was also a good sounding board for venting about actual problems and the small stuff that I shouldn't sweat.

Last week was the last week of my semester, and it was incredibly busy and stressful. Usually, Tuesday is our day for speed work, and Thursday is a tempo run day. I missed out on both this week and thought I just wanted to sit on my couch all weekend. He asked me to go run the Cajun Country Half Marathon in Lafayette yesterday, which I initially resisted but ended up registering for on Friday when I had a burst of energy.

Not knowing how I would feel after the stressful week I had, we agreed to treat the race as a training run. What ended up happening, however, was that we started off pretty well and managed to hang on to our pace and earn Ken a comfortable little personal record (PR) for the half marathon distance! We carpooled to the race with another one of his friends, Julianna, and it was a really nice way to spend the morning and burn off some stress from the semester.

I was also registered to do the Mississippi Gulf Coast 5K on Saturday and the full marathon on Sunday with some friends from Baton Rouge, but life and COVID happened, and we did not have our girls' weekend. Since I felt good after the half yesterday, I decided to make the drive over to Biloxi early this morning and toe the line. He encouraged me to go, saying "Don't miss out. It's a great event. Wish I could go." I'd told Ken that I would run with him if I stayed in Baton Rouge, but I was going to make that decision when my alarm went off at 2:30 am. He told me not to text him at 2:30, and I said I would wait until 2:31. In actuality, I sent him a text at 5:30 this morning:

I decided to run! Waiting for my shuttle to the start now. I have a funny porta potty story for you next time I see you.

I didn't hear from Ken all day, which is a bit unusual. Typically, if he knows I am running a race (virtual or otherwise) he checks in for updates, but I heard nothing today. After I drove back to Baton Rouge, showered, and put on my pajamas, I wrapped up in my super soft new blanket, climbed in bed, and started scrolling through social media. A few minutes later, another local runner messaged me and asked what happened to Ken. I was confused, and then they said they had seen a post that Ken passed away. I heard from a few other people that it was true.

This terrible news is, of course, not at all what I expected after racing yesterday and texting last night. I am struck by how short life is and how quickly things can change, but all of that seems trite. Really, I don't think I'll realize what has happened until we don't do speed work together on Tuesday. I am modifying the paces on the training plan we are doing together to see if I can break 5 hours at the Louisiana Marathon next year. It's a little late to be making this adjustment, so it's going to be an ambitious goal. However, I am going to commit to doing my training runs as prescribed (including striving to make the recommended paces). Maybe I'll shift my blog into training mode between now and race day (January 17!)

Until then, here are some lessons I can think of off the top of my head that I learned from/with Ken in our short friendship:

Also, here are a few photos from our friendship, including a pre-race photo from yesterday's half marathon and a finisher picture from yesterday (courtesy of my new friend Julianna)! 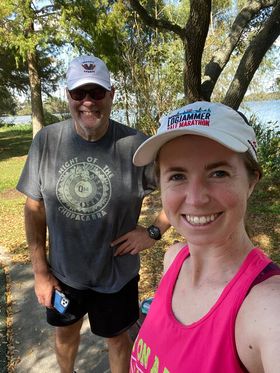