There is a variety of advice out in the universe about how to choose friends and build relationships. In the case of my friend Cari, we first met through our Great Books class during our first semester at Mercer University, and she joined Alpha Gamma Delta the following spring. In our sophomore year, we shared a suite in Shorter Hall, and we both lived in the Alpha Gam house for our senior year. I had approximately zero fashion sense in college and frequently raided her closet when I needed something stylish to wear. We also shared a particularly strong bond over weird things, especially weird sorority history.

When I got married, Cari bought me a copy of The College Woman's Cookbook, which was a cookbook that was published by Alpha Gamma Delta in 1934. The proceeds went to Alpha Gam's philanthropic focus at that time, which was a summer camp near Jackson, Michigan for underprivileged children. I thumbed through the cookbook when she sent it to me and chuckled at a few of the recipes, but the urge struck me today to cook something from the book.

Desserts are typically my go-to, simply because I enjoy a good treat. One recipe caught my eye because it was submitted by Estelle Shepard Beswick, who is one of Alpha Gam's founders. (Alpha Gam was founded in 1904, so I should not have been surprised that the founders would still be alive and cooking in 1934.) Whatever Estelle submitted either did not catch my interest or required too many ingredients that I didn't have on hand. However, I quickly found another recipe that was written by a different founder, called for ingredients that I had, and was called Hermit Cookies. What more could I ask for during this period of isolation?

At first glance, Hermit Cookies are pretty basic. However, there were a few things I had to look up or completely wing. 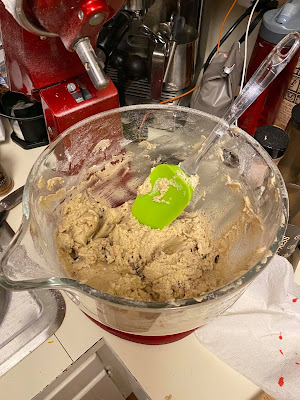 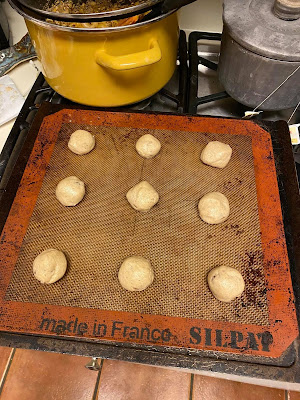 Cool. The dough was ready. The issues didn't stop there, though. 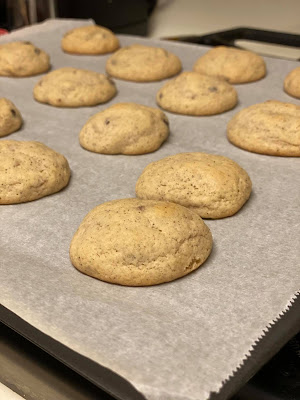 They turned out to be quite yummy! I think Georgia Dickover would be proud of my finished product. The cookies are not overly sweet; Richard referred to them as "old lady" cookies. Our cousin Emily said they sounded like oatmeal raisin cookies without the oatmeal. The recipe yielded about 50 cookies (I didn't count), so I am sending some to work with Richard tomorrow.

Overall, making these cookies was a good adventure in trying something a little different. I connected with the past, and Cari's gift hasn't gone to waste! Who knows what I'll try next?

Something that made today great: I submitted a paper for publication!
Time I woke up: 10:00 am (Stayed up late last night, though)
Posted by Kimberly R. Davis at 11:02 PM