I've grown bored with recounting my daily activities in my blog posts, so I thought I'd switch it up today. First, I thought I might do an "On This Day" type post with exact text from my Diaryland diary that I kept from 2001 through part of college, but the only time I wrote on April 2 was in 2006. The post was about getting rejected from Duke and, quite frankly, was rather boring.

Then, I thought I would fill out a MySpace survey, but I couldn't find one that was short enough to hold my attention.

Finally, I turned to BuzzFeed. I used to love BuzzFeed quizzes. One time when I worked at LSMSA, some of my students and I stayed up late eating pancakes and taking Buzzfeed quizzes, and it was hilarious. I found out I was 2% single and 20% basic from one of those quizzes. I took one about which movie I should watch on Netflix in April, and it recommended "Molly's Game." I might watch that show, but that was not a particularly exciting BuzzFeed quiz. There seems to be a trend of "Do you ____ the same ____ as everyone else?" e.g., "Do you have the same opinions on these Harry Potter villains as everyone else?" and "Do you love the same iconic TV duos as everyone else?") but I'm simply not here for that. There are also quizzes that are like "Wanna know how many kids you'll have one day? Just design your dream house to find out!" (I took that one, and the answer was three.)

I really just want to answer some questions and receive an answer of which character I am from a TV show or which variety of cheese I am. I am not trying to answer questions about one thing and receive an answer about something completely different. Still, since I've been watching "Glee," I did take this "Bake a cake and we'll tell you which 'Glee' squad you belong in" quiz. (I'm Rachel, Kurt, and Mercedes.)

BuzzFeed quizzes aren't what they used to be. I think this is just another indicator that I'm turning into an old grump. 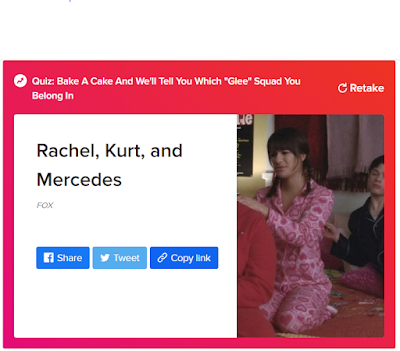 Something that made today great: I caught up with Elena on the phone for a bit!
Time I woke up: 8:45 am
Posted by Kimberly R. Davis at 11:50 PM