This week is National Infertility Awareness Week, so I'm spending to dedicate some of my blog space to that this week. Today is my last post for NIAW.

Within the running community, some people throw around the phrase, "Running: Cheaper than therapy!" It's on shirts, medal hangers, and stickers, and Google tells me there is even a book by that title. When I was training for my first marathon, I kept a training blog on Tumblr. I usually posted about how training was going, but occasionally I reblogged things that I found to be amusing, helpful, or both. The image below was among them. I'm not sure what the original source is, but I found it here today.) 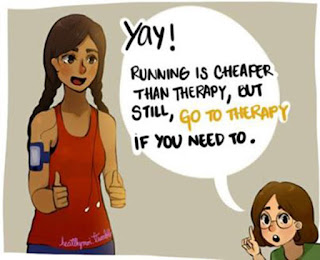 For the first year (plus a few weeks) of trying to conceive, I was disappointed for sure, but the sadness and hopelessness really did not start until June of last year. I knew that 12 months was a rule of thumb for a "normal" period of trying to conceive, so I did not stress too much. I was the maid of honor in my best friend's wedding on June 1, and I measured each month of trying to conceive by what my status would be for the wedding. Once, I told Ariel that I might be as big as a house at her wedding, and she assured me that it would be okay. The months went something like this:

After the wedding, I didn't have a convincing excuse for why not conceiving that month was not so bad. The best I could tell myself was, "Well, at least I won't have to balance a baby and school during the fall semester." When I ran out of excuses, I really started to feel the frustration of infertility. That was when I started crying more and spending more time in bed. After the chicken sandwich explosion and the tearful days that followed, I decided that I wanted to start seeing a therapist. Trying to cope alone was not working, and my pattern was unsustainable.

I was fortunate that I found a therapist pretty quickly and that we are a good match in most ways. I started seeing her in late January, and in one of our first conversations, she told me that infertility grief is a real thing. Looking back, it makes total sense to me, but the thought never crossed my mind before I started going to therapy. When I thought about grief, I thought about losing my dad. When my dad died, he was no longer there to call when I had a question or wanted to share some good news. I lost a friend and a huge piece of my personal support system when he died. When I didn't get pregnant, I didn't lose anything. I just delayed what I hope will eventually come.

Or so I thought.

As it turns out, it is entirely possible to grieve something you never had. With so much else unexplained in my life, it helped tremendously to be able to explain the outbursts, uncharacteristic sadness, and despair. Yes, I was frustrated, angry, and hopeless at times (and sometimes a combination of those), but those are all symptoms of grief.

Once I realized that I was dealing with grief, my whole perspective shifted. I have faced grief in the past, and I will experience it again in the future. Grief is difficult, but recognizing the underlying cause of my feelings and behavior helped me identify strategies to move forward. Richard and I are still trying to conceive. I am still disappointed when I realize that yet another month has passed where we were not successful or when I think about how long we have been trying.

The difference now is that I take a moment to say, "This stinks, and it's okay to be sad," and life continues pretty normally after that. I don't tell myself that I was stupid to think I would get pregnant, I don't feel guilty for being upset about not conceiving. I doubt that infertility will ever be an easy topic for me, but therapy has helped me learn strategies for coping, and I feel more hopeful than ever now.

Something that made today great: Catching up with the BAKErs on Facebook messenger (and playing the silly games on there!)
Time I woke up: 8:35 am
Posted by Kimberly R. Davis at 11:41 PM