A piece of the Undergraduate Interfraternity Institute (UIFI) curriculum that I have loved as a student and a small group facilitator is the session where everyone identifies a few crucible moments and shares with the group. When I looked up "crucible moments" a few minutes ago as I prepared to write this blog post, I stumbled across this quote that I loved:

Crucible moments are unwelcomed, unplanned, and seem to impact one's personal and professional life deeply, but there is wisdom and strength to draw from them if one is willing to look within.

One of the crucible moments that comes to mind and is one I am willing to share is the 2014 Marine Corps Marathon when I was picked up by the straggler bus. (I once wrote about it in a different blog.) I could have quit running that day, or at least retired from marathons, but I didn't. I allowed that heartbreaking experience to shape my future rather than destroy the work I had done up to that point, and I upped my training efforts so I could be stronger. Like the quote said, I gained wisdom and strength from the experience. What I also gained, however, were many new friends...some who I count as my family now.

Through my bus friend, Michelle, I connected with the Red Felt Running Club, where I have met numerous runners who are all fantastic in their own ways. Among them was a Marine named Bob Coolidge, and I learned today that Bob passed away last night.

Bob was a constant encourager for anyone who needed it, and he was hilarious! He was an incredible dog father and had amazing stories that he shared on Facebook. I will always remember an enthusiastic speech he gave before the 2016 Marine Corps Marathon where we did a call and response of "RED FELT" and "IN THE HOUSE!" and he ended by telling us to all go out there and "GETCHUSOME!!!!" That was an unusually warm race day and was tough even for people who had trained in the summer in the South. I saw Bob at the Red Felt afterparty and asked how his race went. I don't remember his exact words, but he basically said it sucked...then he finished with, "But it ain't nothin' but a thang." Indeed, it was nothin' but a thang. Most of us drank some alcohol, and we all lived to run another day.

Not too long ago, Bob was working toward running a 50 miler, and we were going to attempt the Wild Azalea 50-miler here in Louisiana in January 2019. We had been friends on Facebook since 2015, but we started texting each other training updates when we made the commitment to do 50 miles together. Bob ended up having to back out while he worked through some health stuff, but I told him he wasn't rid of me just because he wasn't doing the race. 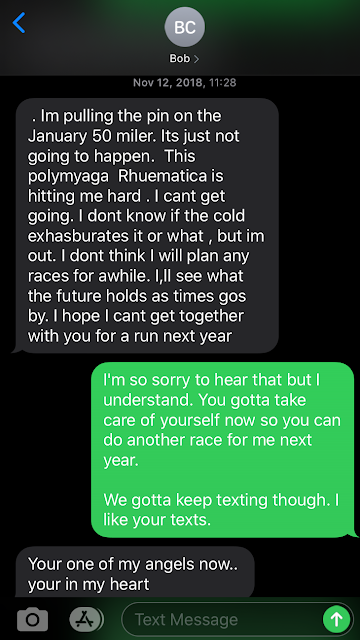 When I had to back out of the 50-miler, I registered for a 100K in February. In my newer, crazier endeavor, Bob was one of my many outstanding cheerleaders. 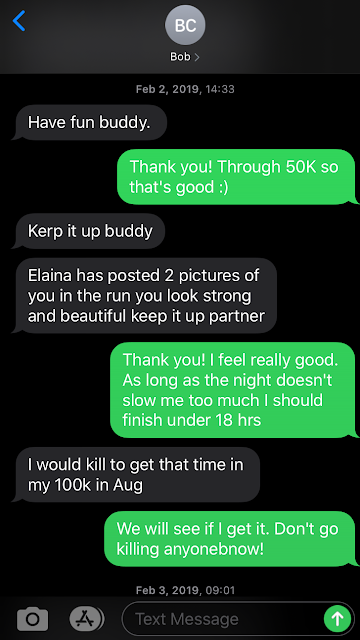 Our text messages became more sporadic (I actually failed to respond to the last two he sent me back in the summer), but Bob was an incredible person to know and a special friend whom I know I could count on if I ever needed anything. I am so sad to hear of his loss and wish I had reached out again more recently just to let him know how much his friendship meant. For now, though, I am proud to call myself one of Bob's Angels, and I know he's watching out for me down here.

My challenge to everyone in RFRC was to share some photos of whatever they do this weekend (which for me is two races) and to take the time to reach out to any RFRC members who might've been absent in recent history. It is unfortunate that it takes a death or tragedy to remind me to check in with people, but I think it's common. Perhaps I will extend the challenge to other areas of my life in the coming weeks.

Something that made today great: The Breakfast Break/Public Speaking workshop at the Women's Center was excellent!
Time I woke up: 7:00 am
Posted by Kimberly R. Davis at 11:32 PM