Richard and I had quite a productive Sunday! A few months ago, Ellen told me about the St. Joseph's Academy Sticker Stampede, a local 5K and 10K, and Richard and I decided to sign up. I registered for the 10K, and he registered for the 5K. As with last year's 5K at the Tiger 10K (maybe it's just called the Tiger 5K?) Richard said, "This will be the motivation I need to get back into training" when we registered and said, "Oh crap, that's this weekend?" when I reminded him that race day was approaching.

Every time I have run since the MCM 50K, running has felt more challenging than usual, and I have been tired every day since the race. (In case anyone is just tuning in, almost every blog post for the past week has at least referenced the fact that I am tired.) Still, with the beautiful weather we have had lately and the training I have been doing, I had a PR on the brain. My most recent 10K PR was an unofficial PR I set on a training run in June, so I felt confident that I could beat that and my official 10K PR, which was from the Cowtown 10K in 2018.

Turns out, I was correct! I set my Gymboss for 4/1 intervals and cruised through all of my miles right around a 10:00 pace. The race was two loops of the 5K course, and I leap-frogged a lady with a double stroller for the entire first 5K. I finally passed her up around mile 4 and left her for good, but I hope I can run like she does if I ever end up needing a double stroller...seriously impressive. I saw AnhThauo in the distance as I came up the hill past City Park, so I picked up the pace to try to catch up to her. Shortly after mile 5, I was within yelling distance and was able to catch her attention. She thought I had started ahead of her and had spent the race trying to catch up to me...oops! Between her trying to catch me and me trying to catch her, we were both pushed hard in the race. We finished the last .8 miles of the race or so together, clinching 2nd and 3rd place in our age groups. I came through the finish line in 59:54.8, but my watch only showed 6.05 miles. I'm guesstimating my finish time would have been around 1:01:30, but I signed up for the Tiger 10K next month to secure a new official 10K PR. With some pushing, maybe I'll still make it under an hour! Fingers are crossed.

Other exciting things about the race this morning included: Sandra placing second in her age group, Richard placing 3rd in his age group, and Ellen beating every woman in the 50 to 59 age group at the 5K. Richard and Ellen became new running friends, though they have both promised me that they're not going to dump me for each other as running buddies. (Phew!) 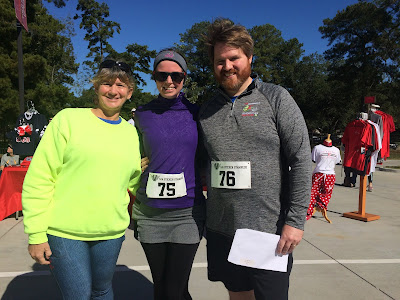 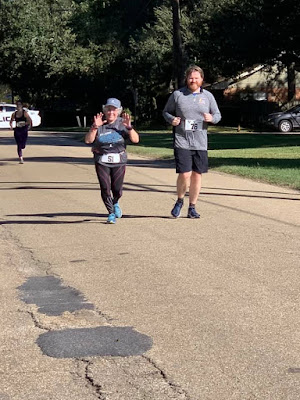 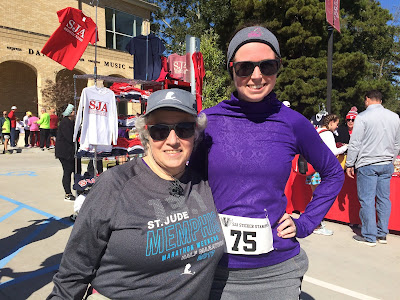 This is the first time in a while that I've had multiple photos in a post! Thanks to Ellen for the photos. :)

After the race, Richard and I headed over to Mid-City to help move into the new Junior League's new space for the Diaper Bank! I am on the Diaper Bank Committee, and we unexpectedly had to vacate our old space at the end of August. A fierce team of movers Tetris-ed all of our diapers onto an 18-wheeler where they have been stored for over two months, but today, they came off of the truck! With many hands, carts, pallets, and even a forklift, we unloaded the truck and (mostly) sorted everything by size. There's still work to do, but we are making progress! 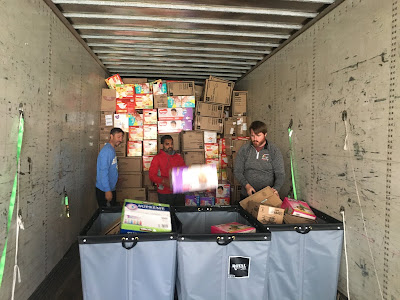 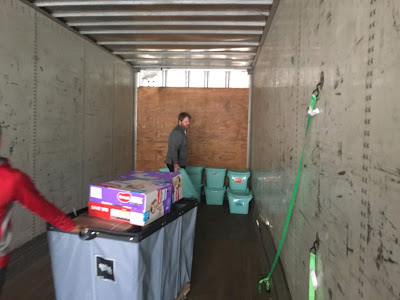 After a highly physical morning and afternoon, we went to Sonic for an afternoon treat and then headed home for a big nap. Now, I am finishing my reading and preparing for the week. I'll be at a conference in New Orleans part of the week, so this will be another busy week.