I am defying the odds by writing a race report after the weekend of the race. Usually, if I don't write anything by the day after the race, it's not going to happen. Not this time, though!

Sandra and I have been training for the Marine Corps Marathon 50K since April. That has meant running more miles than I might like in the heat and humidity, but we have endured the summer (and beyond) and continue to hold out hope that the weather might be decent someday. The MCM 50K is on October 27, so we signed up for the Heart and Sole Marathon in Jonesboro, Arkansas as a checkup on how we are doing and what we might expect in a month. We left Baton Rouge on Friday afternoon and made it to Jonesboro just before 11:00 pm, so waking up early for the race was not my favorite thing. However, we stayed at a hotel across from the starting line, which made everything a little easier on us.

We arrived at the race with hopes of keeping our pace somewhere between 12:30 and 13:00 per mile. After checking the elevation map and looking at the weather forecast, we were not expecting amazing conditions but figured a sub-13:00 pace was reasonable.

The temperature was hovering just under 70 degrees before we started, which was great! We started hitting the hills early in the race--I am thinking before mile 2--and they never let up for us. Rather than following the beeps of my Gym Boss, we started walking up the hills and running down them to conserve energy. The course took us through a residential area complete with a golf course, so that was fun to see. One spectator was offering wine, so we took her up on that. An aid station by the golf course was handing out Snickers, which were a perfect consistency as they were beginning to soften in the sun.

Then, the sun really came out, and everything heated up. The half marathon runners turned off around mile 10, and we headed into an area with more hills, more sun, and not a lot of shade. One thing this race did exceptionally well was having plenty of water/Powerade stops (one every 1-1.5 miles) and an abundance of smiling volunteers. Many of them were Alpha Gams from Arkansas State, and I took advantage of a photo opportunity with them. 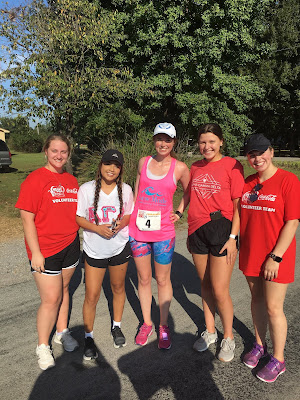 As we entered the last ten miles of the race, the aid stations started to provide more exciting goodies including pickle juice and wet towels. Around mile 17, two ladies in a  small SUV rolled by and handed us popsicles out the window. We called them our popsicle angels. One of the later aid stations also had popsicles, and we each took two from them. The popsicles were a pleasant throwback to the Red River Road Runners summer fun runs, except those were only about three miles each, not double digits.

With the aid of the awesome course support, we survived the hilly portions of the course and finally headed back to flatter land toward the finish. We complained quite a bit for the last few miles of the race. One slight reprieve was that the last mile or so was a lap around the Northeast Arkansas Baptist Hospital, though it was a little cruel once we were able to see the finish line. Also, my watch measured the race at 26.57 miles rather than 26.2 miles. I did not run all of the tangents, but I am not typically off by that much. I guess the extra distance just made it a better indicator of how we will perform at the MCM 50K.

I liked the Heart and Sole Marathon, but it is not a race for everyone. Most of the course was through residential and country areas, so there was nothing too exciting to see. The roads were open to traffic, although there were signs posted to remind drivers of the event. Some areas also had cyclists going back and forth to add a layer of protection for runners. There was never a time when I worried I might get hit by a vehicle, so that is good. The crowd support was also limited, but that did not bother me. The course was probably the most challenging road marathon I have ever run, but I tend to gravitate toward the fast and flat ones. The race had plenty of support to help survive a tough day, and that is what counted for me. I would go back if someone else wanted to go, but this is not a race I will be prioritizing in my rotation while I am living in Baton Rouge.

Although we did not finish in the time we had hoped, we gave a good effort and still managed to take home first in our age groups! (Did I mention that it was a small race and nobody else was in our age groups?) Knowing that MCM will not be as hilly and (hopefully) not as hot, I think we are in good shape for our race next month. I could really use some cooler weather, though! 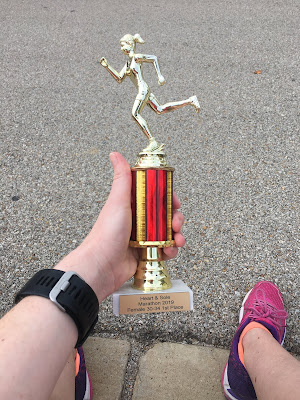 Something that made today great: Roundtables with students from the Baton Rouge Youth Coalition tonight during class
Time I woke up: 7:30 am
Posted by Kimberly R. Davis at 11:39 PM