The day is spelled Tuesday, but it's been a day of twos for me!

1. I went on two different runs! Since at least 2017, but probably 2016, my friend Ellen and I have been meaning to get together and go eat chicken nuggets because we both love chicken nuggets. A few months ago, we decided we would run/walk to McDonald's, eat our nuggets, and walk back, and we did that (though it was mostly a walk due to Ellen having a cold and me feeling like walking) today! What a delight. Unfortunately, I took no pictures, so I guess we'll have to go again soon.

This evening, I did my regular Happy's thing with Sandra--6 miles today! We've started going to run the levee a little early because our training runs are longer than the regular 5K at Happy's, and that gets us back to Happy's before everyone else. In other words, no line for beer! Yet another delight. 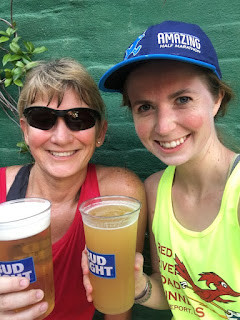 2. I also had two different kinds of fast food meals with fried chicken and French fries today! I already shared that I had McDonald's nuggets for lunch, but what I have not shared is that Richard and I have started a new tradition (I think this was the fifth week) called Fried Chicken Tuesday. It's as simple as it sounds: on Tuesdays we have fried chicken for dinner. I pick it up on my way home from Happy's, and nobody has to cook or clean. We've done Chick-fil-A twice, and tonight we did Raising Cane's for the third time. I hope to eventually diversify our fried chicken options, but Chick-fil-A and Cane's are both on the way(ish) when I head home, so they're easy.

Something that made today great: Finally going on the nugget run with Ellen
Time I woke up: 8:45 am
Posted by Kimberly R. Davis at 11:39 PM No comments:

Whew, where does the time go? I said a few weeks ago that if I didn't get my act together, I'd still be finishing this set of 100 days when I started my summer classes.  Well, summer classes started last week, and I'm a week into the madness. When I start my blogs for the fall semester, I think I'm going to have to commit to blogging every day again...counting down from 300 to 201.

I know I still owe a report on Possum's Revenge. I started drafting one the day after the race, and it's still sitting in my Blogger drafts. Oops. What was even more exciting than DNFing my race, however, was my best friend's wedding! The weekend before summer classes kicked off, we traveled to New York for Ariel's wedding festivities, and we had an amazing time celebrating my best friend and her husband all weekend long. I loved being part of their celebration and can't wait to see where their marriage takes them.

Other than school and running, I'm not doing a whole lot these days. I have a mini literature review due this weekend, so much of my time and energy is being devoted to that at the moment, but I'm looking forward to running tomorrow both at lunch and at Happy's Run Club.

I'll try to be more organized and interesting tomorrow.


Something that made today great: I really like my survey research class, and we met today.
Time I woke up: 8:30 am
Posted by Kimberly R. Davis at 10:11 PM No comments: