Scrolling through my Facebook memories, I'm realizing more than ever before that May 1 is a really important day in my life.

On this day in 2010, I was writing my final paper for my senior capstone class, Genocide and the Holocaust. I had convinced my professor, Dr. David Gushee, that I could craft a meaningful 20+ page paper about Jewish fraternities during the Holocaust. I ended up producing a paper about antisemitism (which I probably hyphenated at that time, oops) in historically Jewish fraternities. Now, portions of that paper are on their way to being incorporated into a book, and I will soon be the co-author of a book chapter for the first time. (Yay!) During my research, I found the following quote from a past Executive Secretary of Sigma Alpha Mu Fraternity (which just happens to be my dad's fraternity) that I shared on Facebook at that time.

"I believe that many an alumnus is giving himself to his community because years ago he learned to give himself to his fraternity, and the objective them was to prepare him for larger usefulness to his environment--not for larger usefulness to his fraternity. I submit that, if theese be our beliefs, we may be proud of what the college fraternity is, and prouder still of what it is going to be." -James C. Hammerstein

The quote showed up in my memories today, which happened to be a day of giving for my sorority! I was just talking yesterday with another sister from my chapter about how it can be difficult to be engaged with the sorority when there are not collegiate or alumnae chapters nearby, but there are plenty of ways to improve the world no matter where you are. I volunteered in high school, but my love for service was really cemented when I joined Alpha Gamma Delta and Delta Sigma Pi. Without joining fraternal organizations, I don't know if I would be in Junior League or if I would coach for Girls on the Run. It's possible, but I'll give most of the credit to Alpha Gam and Deltasig. So, I made a little donation to the Alpha Gamma Delta Foundation as a way to give back to an organization that has given me so much.

Speaking of writing papers, my last final was due today. I was in charge of compiling my group's paper for our project that we've been working on all semester, and I had my own paper to submit. It ended up taking way more time than expected, so other than attending a meeting at the capitol this morning (!!), I took the day off of work to finish my final. Everything was due at 4:30, and I submitted my individual paper at 4:29 pm. That was exhausting, so I immediately took an hour nap on the couch (and Scooter actually wanted to cuddle, which is rare). Then, I went for a run (5.25 miles--it's getting hot outside, y'all), and showered because...

Last but not least, it's my engagementversary! Five years ago, Richard and I got engaged, which is pretty cool. We went out to Fuzzy's Taco Shop to celebrate the end of the semester and the anniversary of our engagement because I love tacos, Richard thinks tacos are pretty good, and Richard loves me. I also had a raspberry Fancy-Rita, which is a raspberry margarita served with an upside down mini-bottle of champagne, and I'm pretty sure I'm going to be drinking more of them as the summer heat is closing in. 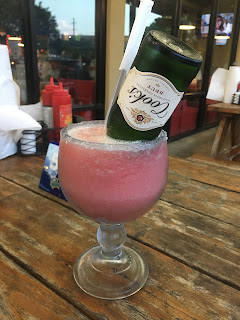 I have made assorted posts about it on Facebook and don't really feel like writing a new one today, so here are all of the posts I've written on other years. There are also photos. Consider it a literature review without the theoretical framework, methodology, and synthesis. I apparently skipped 2017.

2018:
It’s College Decision Day, and while committing to Mercer University in 2006 was cool, committing to marry Richard Davis on this day in 2014 was a million times cooler...and we all know how much I love Mercer, so this is a pretty big deal. Thwarting his romantic dinner plans by eating LSMSA cafeteria steak fingers, saying yes about 24 times before he actually asked me to marry him, making an all call and celebrating in Caddo, and having this awesome sunburn that’s becoming an annual thing all made May 1, 2014 one of the best days of my life.

2016:
It's our engagementversary again, only this time we are married! I love having Richard in my life and am thrilled that we only have a few more weeks as a

#commutercouple. In addition to being smart, talented, hilarious, fun, and generally dreamy, Richard patiently tolerates my antics and contributes to them when possible. It takes a pretty amazing man to put up with me, and Richard does so willingly.

2015:
One year ago today, I ate steak fingers for dinner in the cafeteria as Richard Davis was furiously driving from Minden to Natchitoches with a ring in his pocket and plans to surprise me with a romantic dinner. That was the first of many times things didn't quite go according to plan, but we still ended the night engaged! It was quite symbolic of how we will always make it through life's craziness together. Happy engagement-versary to the dreamy man of my dreams!
Added bonus: I currently have a similar sunburn to the one I had in this photo. 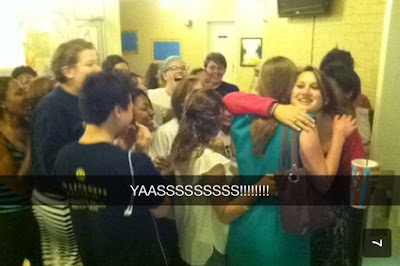 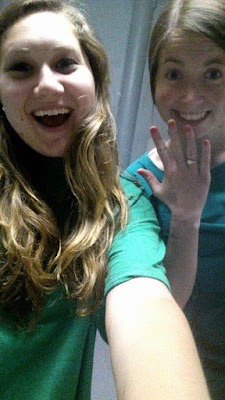 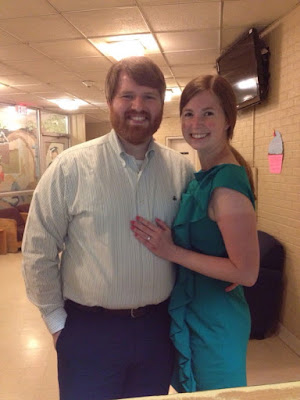 Something that made today great: Finishing another semester of doctoral work!
Time I woke up: 4:35 am (I went to bed early instead of doing school work, and it bit me in the tail!)