Just about two years ago, my trail group, Get On A Trail Shreveport (GOATS), was founded following a 100-mile relay race, the Chicot Challenge. As fate would have it, just a few weeks later, my friend Elena would talk me into running a 50K trail race, the Badlands 50, with her even though the longest I'd run was a marathon (42.2K), and the longest I'd run on a trail was ohhhhhhh...three miles. (Sometimes I'm really surprised that I agreed to do the Badlands 50, and other times, I'm not surprised at all.) At the same time as I was scrambling to buy trail gear (gaiters, shoes, and a hydration vest) and get somewhat trained for a trail 50K in ten days, GOATS was organizing its first group runs. I joined up with the GOATS, and I'm so thankful that I did, because they have become some of my most treasured friends.

This year and last year, the Chicot Challenge has been a bit of a homecoming race for the GOATS, and it's perhaps the most fun I've ever had running. This probably has something to do with the fact that there's plenty of food, fellowship, and beer among the miles of running. Trail runners generally enjoy food, too, and Cajuns make the best race food around; sure, gumbo and boudin exist outside of trail racing, but I'm pretty sure empirical studies have found that boudin and gumbo taste better after a bit of kickin' roots and cussin'.

Teams for the Chicot Challenge can have between 2 and 5 members. Most 5-member teams divide their miles so that each runner does 20 miles at some point during the day. For the last two years, the GOATS gathered for a drawing--I think it's been at Great Raft Brewing both years--and the relay teams are born. Last year, my team, Party GOATS, ended up DNF-ing at mile 84, but this year, I was determined to come back faster and stronger so I could help my team knock out 100 miles in under 20 hours.

I ended up being captain of our team, Totes McGOATS, and we started planning our strategy quickly. Absent T didn't want to run at night, I don't mind running at night as long as I can be slow, and everyone else was down for anything. With our plan established a few weeks before the race, we were pretty much set. I started color-coding a spreadsheet with times and notes a few days before the race, and then as plans often do, our plan changed. Specifically, we lost a team member the day before the race. Some things can't be avoided, so we set a plan in motion to tackle 100 miles as a team of four if we weren't able to pick up a fifth person on short notice. Everyone was quick to step up, and Absent T even said he'd run at night if he had to. With a four-man plan in hand, we started the race Saturday morning at 7:00 am. 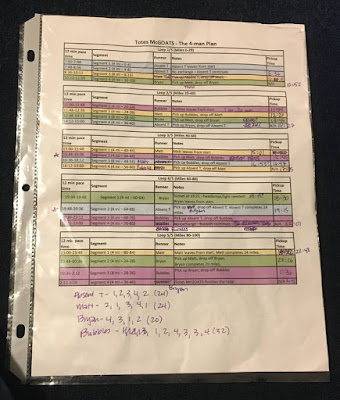 The race is on a 20-mile loop that is divided into four segments with (approximately) the following mileage: 4, 4, 8, and 4. There's some coordination involved with picking up and dropping off runners at each exchange point, and my team hit a snag on our first pickup. Absent T was our first runner, and we had him scheduled to run the first two segments so he would be able to run his 20 miles in the daylight. The exchanges are numbered 1, 2, and 3, and they are located at the end of the segment they're numbered for...not the beginning. When it was time to pick up Todd at the front of Segment 3, I went to Exchange 3, which was the wrong location; he was waiting at Exchange 2. By the time I turned around to high tail it to Exchange 2, Absent T was finished and I was ten minutes away. Rather than lose the time, Absent T decided it would make the most sense to kick a sign, yell a little bit, and take off on Segment 3, the 8-mile segment.

With me feeling like a complete doofus, we went back to the start/finish to hang out until it was time to pick up Absent T at Exchange 3 (for real this time). We also had to rearrange a few things on the spreadsheet to keep everyone's segments spread out, but Matt, Bryan, and I got it all figured out. We dropped off Bryan to run Segment 4, and I apologized profusely to Absent T, who promised me that he didn't think I was dumb. Then we headed back to the start/finish to wait on Bryan, and I was up for Segment 1 on the first loop.

Bryan flew through Segment 4 so fast that I hadn't even changed into my trail shoes, and we'd built a cushion of 8 minutes by the end of the first loop. I took off for Segment 1 in my road shoes; it's the most challenging segment in my (and most people's) opinion, so I wanted to get it out of the way first while my legs were fresh. The average pace to make the cutoff is 12 minutes per mile, and Segment 1 shows longer than 4 miles on my watch. I knew I wouldn't be able to hold that for most segments, but fortunately, I didn't need to have speed as my strength. I finished in 1:01:51, using all of our banked time and leaving us with a six-minute deficit, but it's okay because Matt was up next.

Matt was by far the fastest person on our team. Todd and Bryan can run fast, too, but Matt is on another level. Bryan and I headed to the start/finish before we realized we were going to need to pick up Matt pretty quickly. We took the long way out of the park and made it to Exchange 1 just a few minutes before Matt rolled in--26 minutes for Segment 2. Wow! He made up my lost time and bought us 16 more minutes. We got our exchanges straightened out, and Brian and Absent T finished out Loop 2 with some time in the bank as well; we were 33 minutes ahead of schedule at the end of Loop 2.

Loop 3 was the Matt and Bubbles (my trail name) loop. When we lost a person, I said I was willing to run a total of 40 miles, but it would be slow, and I really didn't want to run Segment 1 more than once. Matt stepped up and said he'd do Segment 1 twice, which was a huge help. He kicked off Loop 3 by running what took me over an hour in about 34 minutes. Dude. I ran Segment 2 in 47:38, contributing a whopping 22 seconds to our cushion of banked time. At Exchange 2, I tagged Matt in for Segment 3, and he ran 8 miles in 58 minutes, even after coming off Segment 1 not long before. He tagged me back in, I finished Segment 4 in 47:38, buying another 22 seconds, and we were ahead of the cutoff by 85 minutes going into Loop 4. We were also ahead of the sun, which was ideal.

Bryan led Loop 4, Absent T met him at Exchange 1 to run Segment 2 a second time (bringing Absent T's total to 24 miles for the day), and I tagged in at Exchange 2 for Segments 3 and 4. Matt had initially been scheduled to run Segment 4 and Segment 1 back-to-back, but we agreed that it would help him if I took Segment 4 at whatever pace I needed (we were still 81 minutes ahead of the cutoff) so he could run Segment 1 of Loop 5 faster. Armed with my headlamp, I took off into the dark woods and ran Segments 3 and 4 in 2:45:41, which dropped our cushion to 59 minutes with just one loop to go. 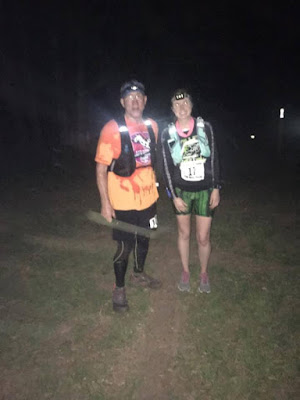 Matt took off for Loop 5 in the dark expecting to take 40 minutes on Segment 1 since he hadn't run night trail before and had already run 16 miles. When Bryan and I arrived at Exchange 1 at 10:40, though, Matt was waiting for us--he'd run the hardest segment in the dark and still beat 40 minutes. What a beast. Bryan took off on Segment 2 at 10:42 pm, then Matt and I headed to meet him at Exchange 2 so I could run Segment 3 a second time. I'd thought I would also run Segment 4 again (which would've been a third time), but Bryan was feeling good and generously offered to do Segment 4, miles 96-100 of the race, bringing his total for the day to 24 miles. I'm really glad he did, too, because the second time doing Segment 3 was tough. I started Segment 3 at 11:27 pm, and I was surprised at how tough it was because I felt like my nutrition had been about right all day, I'd hydrated, and I wasn't hurting anywhere. Around mile 6 of the 8-mile loop, I started thinking about the miles I'd run, and I realized if I'd done Segment 4 again, that would be my third time. I couldn't make sense of it, then I remembered that I'd picked up Segment 4 from Matt, and he never ran Segment 4. So, when I had been awake for 18 hours and thought I was 26 miles into the race, I was actually 30 miles into the race.

I gladly tagged Brian out when I finally made it to the end of Segment 3 (which actually only took me 13 minutes longer than the first time I ran it, 12 miles into my mileage) and called it a day at 32 miles. We still had 42 minutes of our cushion, too! I never would've thought a surprise 50K would be my idea of fun, but here we are. Todd gave me a big hug, and we hung out at the exchange with the Breauxs--who I'm now calling my "Louisiana parents" because they have taken care of me as a runner since I was training for my first marathon--who were waiting for another runner to come in. When their runner tagged in, we all headed back to the start/finish.

Bryan came in at 2:15 am, and Totes McGOATS officially clinched the 100-mile relay finish. The day didn't go exactly as scheduled, and it was certainly not the same plan we'd established a few weeks ago, but we got the job done, and I am so, so proud of these men I call teammates. Perhaps the most amazing part was seeing how everyone's strengths came out to make it all work. We certainly wouldn't have been able to do what we did without flexibility on everyone's part, but I'm also amazed at how much everyone pushed themselves even harder than originally planned so we could still get the job done. Our team was such a great testament to what teamwork can do and how important it is to be gracious when plans change. We needed speed and endurance for sure (which we had), but I don't think we could've done it without the support of each other either, and that's part of what made this experience so amazing. 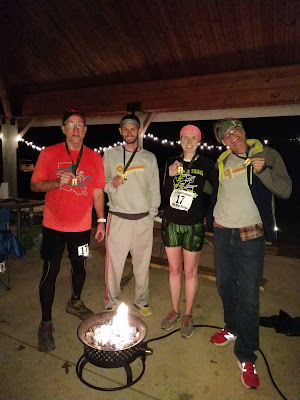 Something that made today great: Reunion food and beverages with Megan and Aaron at Olive or Twist
Time I woke up: 7:35 am?