Before I write anything else, let me just say that I had a chuckle at my own writing-fatigued, bleary-eyed blog post last night. If you missed it, it might be a good idea to review the few sentences I cranked out before conking out.

I wrote yesterday that I had a bad experience with some pants. Specifically, it was two pairs of pants. The first I put on, sucked in, and looked in the mirror only to realize that I had a case of the quad butt going on. Not only were my pants too tight, but they were so tight that my butt was behaving like water overflowing from boiling pot...not a good look.

So, I decided to put on a more faithful pair of pants. They zipped better and didn't give me the quad butt effect, but it was certainly less than ideal. I was already going to roll into work later than I wanted to (remember that I woke up at 9:41 am yesterday...), so I decided to settle on the second pair of pants and try to keep my bottom concealed under my desk as much as possible.

The more I thought about it, though, the more I realized that part of what created this whole tight pants problem was hiding my bottom under a desk as much as possible. I have been inconsistent with working out, consumed more soda, and eaten more late night snacks than I have in years. In fact, the last time I was at a weight I really liked, I was still living in Natchitoches and working at LSMSA. At least there I had to walk around the building and hit the stairs sometimes; when I moved to Shreveport and started working at Centenary, the decline started to happen. It came to a head yesterday, though.

When Richard and I were engaged, we both participated in DietBets (put down money saying that you'll lose 4% of your weight in 4 weeks, then split the pot with everyone who actually does it), and I was slim, trim, and healthy in my wedding dress. But that's been over three years now. I have told myself and have let others tell me that I still look the same, that my weight gain isn't noticeable because I'm tall, or that it's not that many pounds, but the quad butt encounter with my pants was the final straw. I signed up for a 4% in 4 weeks DietBet and a 10% in 6 months DietBet, then to bolster my commitment, I signed up for a RunBet. I signed up for what looked like the most challenging one, and the longest run is 5 miles. I have to keep the pace under 15 minutes per mile on my runs, which is also not a big deal. What this RunBet requires that I have not been achieving, however, is frequency: I have to get out and run the specified distances five out of seven days per week, and that's the kind of healthy habit I need.

So, I've got some money on the line that says I'm going to eat less, work out, and kick the quad butt to the curb. We'll see how it goes.

Also, I googled "quad butt," "oozing butt," "oozing booty," and "four butt cheeks" trying to find a photo describing my phenomenon. "Tight pants panty line" was the winner, thanks to this blog post about finding the right underwear for yoga. 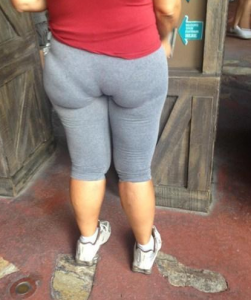 Something that made today great: I had a fabulous meeting with my advisor! I love meeting with her and talking about the next few years, and today, we worked on my plan of study.
Time I woke up: 7:58 am
Posted by Kimberly R. Davis at 11:25 PM