I don't dress up for Halloween every year, but this year I got in my head that I wanted to be Wonder Woman, and I wanted Scooter to have a Wonder Woman costume as well. I had no real reason to want to be Wonder Woman for Halloween--I haven't seen the new movie or even the old cartoons--but for some reason, the thought was stuck in my head. I actually think my interest had more to do with that time Summer dressed up as Wonder Woman in the OC, as I. Love. The. OC. (Note to self: I need to rewatch that episode ASAP.) More times than not, I achieve what I set my mind to, and with the ease of Amazon Prime, I conquered this spooky objective.

Anyway, what happened when my costume showed up is that I didn't look as good as Summer OR the photoshopped model on the package when I put the costume on, and I was slightly disappointed by that. I run marathons! I should have a rockin' body for whatever Halloween costume I want! It's not fairrrrrrrrrrrrrrrr! 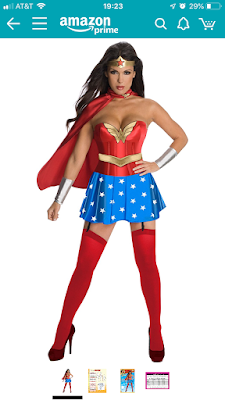 I wrote earlier this week about how pleased I was when my low expectations were exceeded by the bathrooms at Stuckey's, but I am glad I did not have super high expectations for this costume because there were certainly some differences between the photo and what I received. For one, that skirt isn't even the real skirt that came with the costume. Also, the gauntlets (arm pieces) are totally not tapered like the ones in the picture. Mine are regular old tubes with the same diameter throughout. Finally, the top did not have nearly the same effect on my chest. It wasn't a total bust like some Pinterest fails or horrendous Wish orders gone awry that I've seen on other posts, but I don't think I fooled anyone into thinking I am an actual superhero. For a Halloween costume ordered from the internet, though, I did just fine. Plus, my dog and I matched for Halloween, and that's worth its weight in gold.

Here are some fun photos from our day! 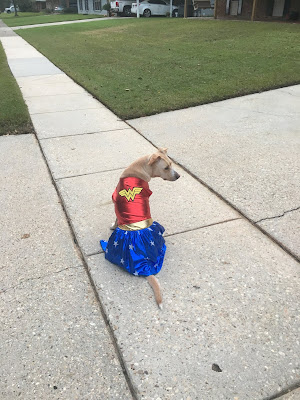 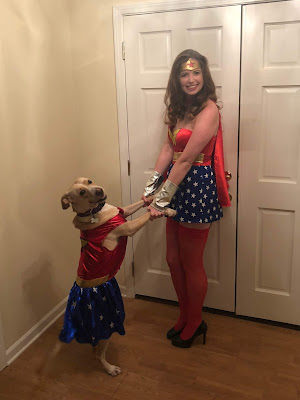 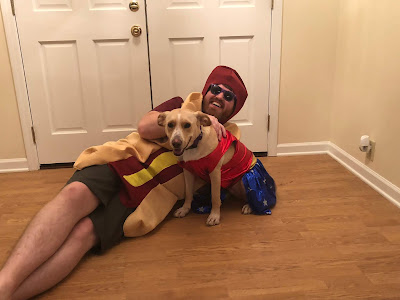 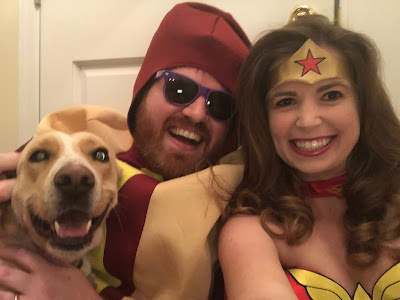 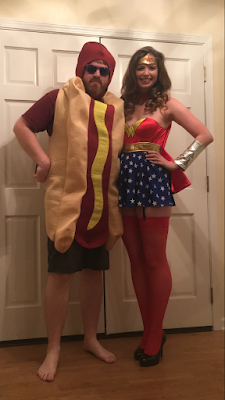 Something that made today great: Taking family Halloween photos
Time I woke up: 7:15 I think.
Posted by Kimberly R. Davis at 7:52 PM