There are more episodes of SpongeBob SquarePants in the world than I have the time, energy, or desire to watch, but I did watch some SpongeBob when I was in high school, especially when my sister was in her SpongeBob days. One episode I have seen a few times (I think Leah had a VHS of this one) comes from the first season, and it's called "Ripped Pants." I won't go through the entire plot of the episode, because everyone knows that SpongeBob is nothing if not deep and thought-provoking, but there's an episode summary on iMDB. The important thing to know is that SpongeBob rips his pants, and when he realizes it makes people laugh and gives him some good attention, he keeps ripping his pants and talking about it. ("Oops, I ripped my pants again!") 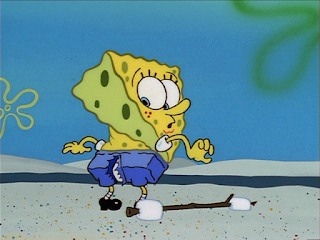 Well, today I ripped my pants, and while I don't want to keep ripping my pants, I do want to talk about it. So here's the saga of my now-ripped pants.

Back in December of 2016, my aunt Lori and I indulged our inner Maxxinistas and went shopping on TJMaxx.com right after Christmas. (She was ordering me some clothes for Christmas.) I picked out a pair of super cute navy pants that had a cuffed hem and a large square pattern on them, and I was really excited to wear them to work.

Well the package arrived, and when I tried on my new clothes, the zipper on the pants was busted. I didn't want to fool with sending them back for an exchange and risk getting another bad zipper, so I decided I would just have someone in Shreveport put in a new zipper for me.

People who know me well will tell you that I am either all in and getting things done early and done well, or I am a walking, talking tragedy who might never accomplish the task at hand. When it came to these pants, I was in the latter category, but in October 2017 (yeah, I could have conceived and birthed a child by the time I took these pants for a repair...but I didn't) the topic of alterations came up with my former colleague, and we decided to drop a few items off on our lunch break one day.

We dropped them off at a dry cleaners and were told that they'd call us when the alterations were done. Since it was October, it was almost "cute winter work pants" season again, so I was excited about getting a call...but the call never came. I waited for a while--several months--but I couldn't even remember the name of the place where we took them, and the ticket they gave me with the store information was somewhere in the abyss of our condo. (Remember how I mentioned that I am a walking, talking tragedy if I'm not getting things done early?) All I could do was wait.

In June 2018, my colleague happened to ask me if I'd ever heard about my clothes. I told him I had not, so he called, and it turns out our clothes had been ready for a while, the alterations people just didn't know how to contact us. That very day, we went to pick up our clothes. True story: the pants weren't filed under my name, my phone number clearly wasn't attached to them, and to top it all off, I couldn't even remember what I needed fixed on the pants. That's what happens when you buy pants and don't wear them for a year and a half.

Eventually, I was able to provide a mostly accurate description of the pants, and they rang up my total so I could finally take the pants home and wear them.

Fast-forward to today, three months later, when I decided that today would be an excellent day to wear the pants. I picked out a cute top and went to work. Things were fine, I climbed in and out of my car, sat down and stood up from my desk chair a few times, and even did a few squats. (Okay, not the squats. I don't do squats very often.) It was like every other day in my life when I had worn pants and shorts...until lunch time. I decided to go home at lunch to let Scooter out, and as I eased into the driver's seat of my car, I heard and felt the rip of the seam in the seat of my pants. This wasn't a puny little rip, either; the hole was big enough that I could easily fit my hand through. (I don't think my head would fit through the hole, though.)

Honestly, I don't even have words to describe these pants except "junkahola," a term coined by my aunt Lori, the one who bought me these junkahola pants. I put them on once, and the zipper broke. Then, the second time, I busted the booty with my below average size badonkadonk. Sometimes, the things in life that you think will be wonderful and fashionable are really just convoluted road maps to spending time and money on something that just isn't meant to be, and that's all I can say about the junkahola pants. Lesson learned.

Something that made today great: Date night with Richard and Scooter! We went to the dog park, then we had dinner at the Fat Cow, a dog-friendly burger place not too far from us.