Adventures in the City

At Christmas, I could not decide what I wanted as my gift from Richard, so he offered to send me to New York to visit Ariel, my best friend. Whereas I moved to the delightful small Southern town of Natchitoches (which I lovingly refer to as "Dirty Natty,") Ariel braved the big city after college. I took advantage of my Christmas gift this weekend, and it was fabulous.

Because of crazy layover times (refer back to the part where I live in Natchitoches), the best option financially and schedule-wise was to fly direct to New York from Dallas. I was able to spend Thursday night with my Deltasig brother Paige and her daughter, Brooke. We enjoyed a delightful Tex-Mex dinner on the patio of a restaurant near where Paige lives, and Brooke let me watch Barney with her after dinner before I fell asleep on the couch. (You know you're getting old when a four year-old stays up later than you do...)
I picked a super early flight out of DFW, which meant that I made it to NYC in time for lunch. After a short ride with Lyft, Ariel and I were reunited. (I am always so proud of myself when I successfully transport myself from point A to point B in an unfamiliar place.) We set out to find some lunch--we settled on The Bonnie, which was delicious--and some better shoes than the flats I'd packed for the trip. I ended up purchasing a pair of cowgirl boots from DSW in Times Square. Leave it to me to purchase cowgirl boots the one time I travel out of the South. We also stopped in for happy hour at the Headless Horseman as we wandered around the city.

Friday night, we enjoyed a lovely wine and cheese spread at Casellula for dinner before going to see the Broadway production Kinky Boots. (We were able to purchase tickets in the middle of the ninth row!) The venue was small enough that being nine rows back made for an up close viewing experience, and Ariel and I loved it. The show was hilarious yet heartwarming, which is right up my alley. Ariel, on the other hand, asked "Why did they have to throw that love story in there?" which led to me agreeing that there was a pointless romantic bit in the plot. Oh well. 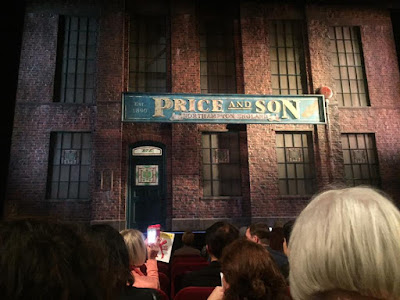 On the way home, we stopped for a late night snack at Artichoke Basille's pizza, which also proved to be a delightful treat. We enjoyed our pizza while watching The Office and Friends on Netflix..


We slept in on Saturday before going to get bagels from New York City Bagel and Coffee House. The bagels did not disappoint; I can see why they are Ariel's favorites. Then again, enough cream cheese can make many things delightful. After eating half of our bagels, we returned to Ariel's place to watch more Netflix, and I ended up taking a nap because my back was bothering me. (More on my back injury in the future...)

When I awoke, we went for a walk around one of the parks in Astoria and walked by the river. On the way to the river, we stopped for this photo opportunity with this sign that says "Everything is better with some wine in the belly." The owner of the restaurant was kind enough to take the photo for us once he realized I was not trying to steal one of the chairs outside of the restaurant (I was just going to prop my phone up on it to take the photo!) While he missed part of the sign, he did a good job capturing my new boots. 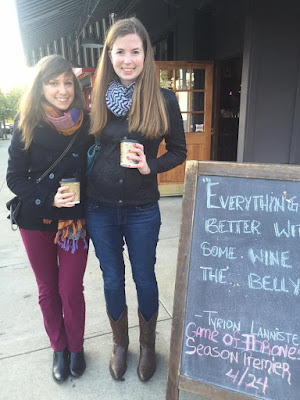 It is worth noting that in addition to being unprepared shoe-wise, I was not prepared to need a coat or scarf. In fact, my coats have all made the move to Shreveport and are no longer occupying real estate in my apartment. I guess that's April in Louisiana for you. Fortunately, Ariel has an abundance of scarves and at least one extra coat, so I did not have to suffer in the cold.

Following our romantic walk and talk in the park, we ate organic burgers and enjoyed an incredible Bananas Foster shake from Bare Burger. We spent the rest of the night hanging out at home, and we watched the last few episodes of The Office. I feel like a chapter of my life has come to a close now that I have seen the end of the series.

Similar to Saturday, we slept in on Sunday before settling into a delicious brunch, this time at Tru. I could certainly get used to the brunch lifestyle, although I would also have to walk as much as I did this weekend to remain reasonably healthy.

After a leisurely meal, we took a train into the city to visit the Metropolitan Museum of Art (aka "The Met") where I was excited to see the famous Met Steps from Gossip Girl in real life. Of course, the art within was (generally) more exciting than the steps. (I am referring, of course, to some of the modern art that I did not fully comprehend.)

Finally, it would be remiss of me to leave out the bonding I did with Layla, Ariel and Kevin's dog. As someone who is not great with dogs and does not like anyone--dog or human--to breathe or lick my face, I would say that enormous strides were made this weekend in my dog relations. Richard really wants a dog when we live somewhere bigger, but Ariel argues that she, Kevin, and Layla successfully coexisted in a studio apartment. Maybe we will get a dog sooner than anticipated. 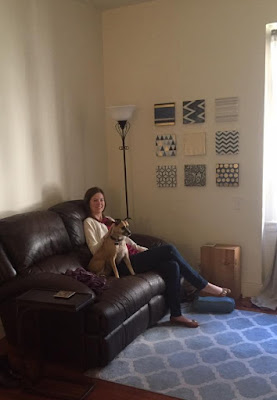 Traveling can be exhausting, and the fast pace of the city was certainly not restful, but somehow I feel rejuvenated. It's comforting to be around familiar people and to take in their new way of living and doing things. I loved doing a few touristy things, seeing parts of the city as a local does, and resting with my best friend; I think we balanced our time well. I am starting this week grateful for lasting friendships near and far as I settle in to the last few weeks of my current job and lifestyle. 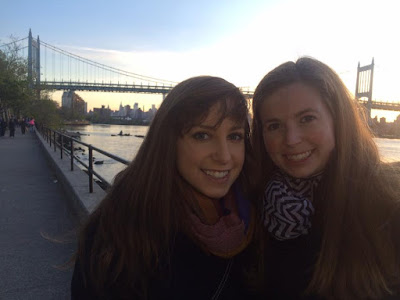