After the good news on Friday, I took home pregnancy tests every morning when I woke up (that's first morning urine, or FMU) to make sure I was still pregnant. While a common practice, this is not a best practice for many reasons including that the darkness of the line is indicative of the concentration of HCG...but only to a limited extent. My lines were looking good, and I got what's called a "dye stealer," which is supposedly when the test line is darker than the control line because it has stolen some of the dye that would've gone to the control line. I don't know how true all of that is.

What I do know is that the amount of dye stealing leveled off, and I spent some time going down Google rabbit holes to compare pictures of other people's pregnancy tests and HCG levels to try to guess where mine was. I do not recommend doing this, but for full transparency, I now have a photo album on my phone called "Other People's Pregnancy Tests." I also have an album of photos of my own tests, appropriately titled "FET #3," but despite my openness about infertility and other intimate matters, I have a personal policy that prohibits posting pictures of things I peed on to my social media/blog. So, you'll just have to trust me on these.

My blood result yesterday, about 99 hours after Friday's beta? 2459. Woah. This number doesn't have any 3s in it, and I have no musical recommendations based on this number, but I guess 2459 means something to me now! 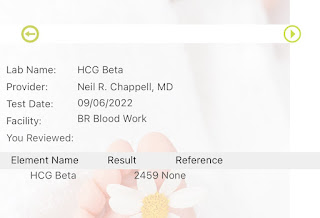 I found out my result early by stalking my patient portal, and I even wondered if there was the slim possibility of a mix-up. When my RE's assistant called an hour later, she read me the same number. This time, I responded more professionally than I did when she called with our preimplantation genetic testing (PGT) results. (It probably helped that I knew what to expect.) She told me to continue all of the medications and that my RE wanted to see me around 7 weeks, so September 29 or 30. Naturally, I picked the earlier date, but it's still over three weeks away.

While I recognize that not needing to go back to the RE's office is probably a good thing, it feels a little weird to have weeks to wait after biweekly monitoring appointments for egg retrievals and IUIs. This is just one way that infertility has warped my ideas about what pregnancy is like. Pregnancy has been so difficult for us to achieve that it's hard to imagine just sitting and letting a baby grow, but that's exactly what plenty of people do. In fact, many people might not even know they are pregnant at this point (five weeks today!)

This seems to be our most promising transfer yet, so I'm remaining hopeful and dare I say allowing myself to get a little excited? I don't have any major symptoms but am definitely grazing and snacking more than usual. I'm not complaining yet, but I'm definitely going to have to find ways to stay busy for the next few weeks. There's plenty of knitting and work to do, and I'm not one to turn down a nap either. In other good news, my RE said I could run as long as I paid attention to my body and stayed hydrated. I am super hydrated, and so far run/walking is working for me.

Fingers crossed for rising betas and a growing baby!

Something that made today great: A visit to Buc-ee's!