There's a lot of collaboration that occurs within academia, and this allows people to publish in some highly specific stuff related to their research. Sometimes, for example, editors of an upcoming book will put out a call for proposals for chapters related to a specific topic. This also occurs in scholarly journals; if a topic draws enough interest or relevance in the field, journals will seek submissions for articles to include in a special issue. In fact, some colleagues and I recently had a proposal accepted for a special issue of a journal, which was exciting!

What is less exciting is that today I learned I could author a chapter or article about several ways to have rising HCG without the possibility of a baby in 9 months. The first was in October/November when I had the chemical pregnancy: a little HCG, but not enough. The second was today.

This morning, we were scheduled for an 8:30 ultrasound to check on the status of the pregnancy that had followed from our fresh embryo transfer. By now, I'm a pro at taking off my pants and getting into the stirrups. When my doctor came in, he asked if I had any cramping, nausea, or bleeding, and I responded "no" to all three but said I'd been thirsty and been grazing a lot. He seemed happy to hear that and got to work with the ultrasound wand.

I'm familiar enough with the ultrasound routine--and my doctor is familiar enough with a uterus--that I know when things are going well, the ultrasound operator finds what they're looking for pretty quickly. I moved my eyes back and forth between the ultrasound screen and my doctor's eyes, and he said a few times, "I don't like what I'm seeing." After a discussion board conversation with an internet stranger yesterday (0/10 do not recommend), I'd started to worry that my slow-rising HCG meant the pregnancy was ectopic--that is, implanted somewhere other than the uterus, often the fallopian tubes.

I'd read a little about what a blighted ovum is because that is another thing that low/slow rising HCG could indicate. It's also known as an anembryonic pregnancy, and if you break down the term with "an" meaning "lacking" or "without," it's exactly what it sounds like: a pregnancy without an embryo. I didn't think much about the possibility of it happening to me until this morning when my doctor said he suspected it was happening to me. Then, my inner dialogue (skip a few lines if you're not one for colorful language) kicked in.

How the FUCK is there a pregnancy without an embryo when we all saw you put the embryo in?

I'm still unclear on the answer to that question, but what I have learned is that it's pretty common. According to the American Pregnancy Association, about 50% of first trimester miscarriages are due to a blighted ovum. Sometimes a blighted ovum can be a misdiagnosis if someone believes they are later in the pregnancy than they actually are (they ovulated/conceived later than they realized), but that does not happen in the case of IVF.

My RE took a few pictures of the little gestational sack and told Richard and me that he didn't think things were looking good; it appeared to be an abnormal pregnancy. I could tell he was upset by this development (or lack thereof) too.  I guess this doesn't get easier even if it's your job and you do it every day.

He said we could do bloodwork to check HCG, and he gave us an overview of the options. We could see what my body did on its own, I could take medication to end the pregnancy, or I could have a surgical procedure called a dilation and curettage (D&C) to remove the tissue from my uterus. We opted to take the bloodwork and see what it said before making a decision. A bonus (if you can call it that) of the D&C is that the tissue could be sent off for testing to get an idea of what went wrong. The downside (which is a big one) is that it sounds really traumatic. In reality, I'd probably get used to it in the same way that I got used to the stomach injections before retrievals and the PIO shots before and after transfers, but I am hoping to avoid that path.

When my RE called this afternoon (remember that he calls when the news is bad), he told me that my HCG had risen to 2429, which is still rising but lower than he would expect at this point. (Yeah yeah, heard that one before.) He also said he did not expect this to be a viable pregnancy but gave me four options:

Richard was asleep, so I told my RE that I would text him after I had a chance to talk to Richard. Richard felt that it would be best to skip our shot tonight, so I took that to mean we were going with option 2. I had sort of been leaning toward option 1 but also knew that it could be delaying the inevitable. A downside of option 1 for someone who's having unpleasant pregnancy symptoms (vomiting, nausea, etc.) is that HCG can continue to rise and those symptoms will persist in the presence of a blighted ovum. In my case, I'd only be dealing with thirst and eating more frequently. Nothing major. It seemed like option 1 would give us the best chance at a miracle. Option 2 still leaves the door open for a miracle to happen, but it allows the miscarriage to follow if that is what needs to occur.
I guess maybe I should've held onto my pregnancy impostor status until we saw an embryo in the gestational sack. Then again, a blighted ovum is still a pregnancy loss. The fact that it is a pregnancy loss implies that there had to be a pregnancy to lose, so I guess I wasn't really a pregnancy impostor either.
I cried almost all day. I've been nursing a [non-COVID] cold for almost a week, and I'm still having a hard time breathing quietly, especially when I am lying down. I tried to work, and I tried to sleep, but all I could do was cry. When I did attempt to sleep, I woke Richard up with my sniffling and heavy breathing. Regardless of how unpleasant today was, I will say that this is not nearly as bad as the last time I miscarried or even when we had no normal embryos after our third IVF cycle. I don't feel as if someone is holding me against a wall by the throat, and I don't want to crawl into a hole. Maybe I am getting tougher or at least getting used to dealing with this type of news.
Ugh.

Don't get me wrong, I'm still completely heartbroken. This time around, though, I feel more confident moving forward. In the same way that pregnancies are all different, I know that miscarriages can vary too. Provided that my body figures out what to do, I should be able to avoid the pills and the D&C. I want to start healing. Healing might involve taking a break for a bit. I desperately miss running and am going to pick that back up as I navigate this wave of grief. My best friend reminded me today that God doesn't give us more than we can handle, and it's true...but I kind of wish I couldn't handle this so God wouldn't give it to me.

When I first opened up about our [in]fertility struggles, I said I wanted to help educate others and end the stigma that surrounds infertility. I think I've done a good job being open about my personal experience, but I want to speak to the stigma for a moment. Specifically, I want to say that Richard and I are by no means the only people in your social circles that this is happening to. I've shared before that 1 in 8 couples experiences infertility, but 1 in every 4 pregnancies ends in miscarriage. This is really unfortunate, and I hate counting myself among either of these groups, but here's what I hope that anyone reading this can recognize: in the sea of social media posts of baby announcements, ultrasounds, gender reveals, births, and children's milestones, people you know and love are suffering the same fate I am. Maybe they aren't going through IVF (or maybe they are and aren't talking about it), and maybe they haven't said they are trying for children (or maybe they weren't trying but got pregnant anyway and started to feel excited), but there are people who are suffering alone and/or in silence because they feel like they can't talk about it. Maybe they think they did something wrong or that the miscarriage was their fault. I'm really angry about my current situation, but I have an incredible support system because I refuse to be silent. However, not everyone is able to be a loudmouth like I am. We must break down the walls that we use to put people and couples into little boxes with inaccurate notions of what families, motherhood, and pregnancy look like. This is too painful for people to face alone, but that's exactly what is happening.

Several people have asked how they can support me, and there's not much that can be said or done for me at this point. What you can do is make an effort this week to end the stigma. That can come in many forms, including taking a few minutes to read up on infertility or pregnancy loss. (And if you find a good resource, don't be afraid to send it my way!) 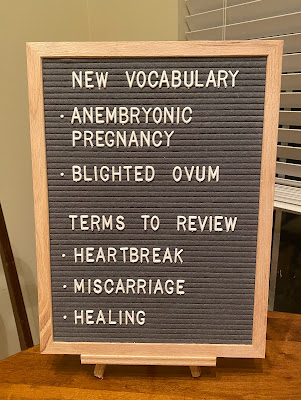 Something that made today great: The COVID test I took on Saturday came back negative.