A while ago, I told my therapist that I thought infertility would just be the beginning of worrying for the rest of my life. If we ever made it to the next step in the [in]fertility process--which sometimes it felt like we would never get there--I wondered if I would ever be able to settle in and get comfortable. As it turns out, early pregnancy comes with a different set of questions and uncertainty. I guess that's life; there are many things to celebrate and numerous ways to find joy, but there are also a lot of things to worry about. The challenge then becomes to focus on the joy, especially when the things we worry about are beyond our control. (Easier said than done.)
The great news in all of this is that as of my blood test this morning, I am not only still pregnant, but my HCG levels are rising. Since Thursday's appointment, we saw an increase from 272 to 603, which is an average increase of 48% per day and a doubling time of 83.6 hours. Most of what I am reading says that doubling time may slow to about 96 hours after HCG is over 1200, but one said that the slowing happens around six weeks of pregnancy. I guess in many situations, HCG is over 1200 by six weeks of pregnancy, but I'm allowing myself to believe that at 5.5 weeks pregnant, mine could be slowing because I'm almost to the sixth week.
What I really need to allow myself to do is get off of Google. I am also going to limit my home pregnancy testing. It'd be super cool if I had enough self-control to test every 72 hours at a minimum, but I'm thinking 48 hours is about the best I'll be able to do. Maybe I will surprise myself, though.
The next step is to come in for an ultrasound next Monday morning at 8:30 am. We should be able to see where our embryo implanted and see a gestational sack. We might see a yolk sack. At six weeks, the baby is about the size of a pea, so hopefully we'll see that. It is also possible that there will be a heartbeat, and we will get to hear it! With our current numbers, it is difficult to say. In some normal pregnancies, a six-week ultrasound is too early for a heartbeat. Thus, I'm not really sure what to expect on Monday, but I remain hopeful that I'll still be pregnant and that our little baby will be growing.
I'm not sure if I'll post anything between now and then or not. So far, I don't have many pregnancy symptoms beyond drinking more water than usual and grazing/snacking throughout the day, but if something changes, I might be inspired to post. The internet is telling me that I'm approaching the point where morning sickness starts for many people, so I could have great tales of morning sickness to share before Monday. I simultaneously do and do not want to have morning sickness, but I'd definitely take the morning sickness if it meant our pregnancy stayed viable.
Please continue to pray for us and for our little embryo! 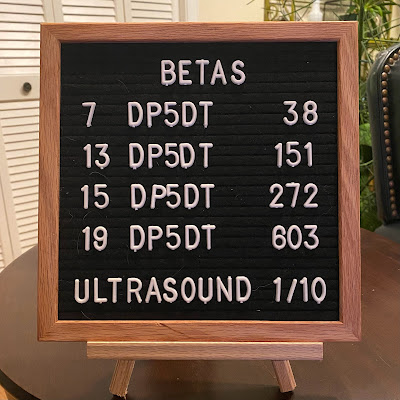 Something that made today great: Watching The Wonder Years at home with Richard (because he's off work tonight!)
Time I woke up: 7:00 am
Posted by Kimberly R. Davis at 10:50 PM