Yesterday was day 15 since our transfer of a five-day-old embryo, and it was our third round of betas for this cycle. I was cautiously optimistic after the beta was 38 at 7dp5dt, then I was a bit nervous when it was 151 at 13dp5dt, meaning it was doubling every 72.34 hours (whereas the expected doubling time was 48-72 hours). My doctor brought me back 48 hours after my last blood test (that is, yesterday morning) to check how things were progressing. Before I headed to the hospital, I took a home test when I first woke up--in trying to conceive (TTC) world, that's known as first morning urine, or FMU)--and it was still positive. I promised myself I would not look at my patient portal until at least 1:30 pm, and I stuck to that.

As it turns out, my watch has a stress feature. When I checked a few times yesterday morning, I was hanging out in the medium- and high-stress zones. My watch also has a feature that will walk me through breathing exercises (inhale, hold, exhale, hold, repeat...) so I did a few of those to try to stay cool, calm, and collected. It sort of worked.

When I logged into the portal at exactly 1:30, I had an update: 272! I had already done some calculations at home to figure out what the number would be if I was still doubling every 72-ish hours, Thus, I knew the number I wanted to see was a minimum of about 240. I hopped over to Betabase to calculate the doubling time and was pleased to see we'd moved from 72.34 to 56.53 hours; that seemed promising. Until I heard from the fertility clinic, I didn't want to get too far ahead of myself. However, I felt like I could breathe a bit easier. The stress level on my watch dropped, too! How fascinating. 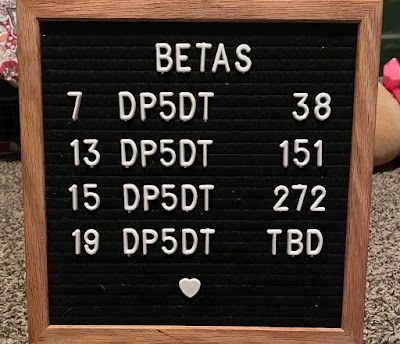 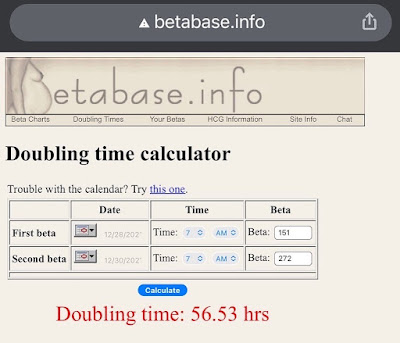 My nurse called at 2:13 pm, and the first thing she asked was how I was feeling. I was honest and said, "Well, I already peeked at my results, so I'm feeling pretty good." She told me that my RE still wants to keep an eye on the progress since the numbers are low. I agreed to come in on Monday for another blood draw. As I was sending out update texts later that afternoon (after Richard was awake and had heard the news), a friend said, "How many tests are they going to do before they let you relax?" which is an excellent question...but we also agreed that the frequent updates are a silver lining (at least as long as the news stays good.)

Not that there's any normalcy or standard in all of this, but a person who has a 28-day menstrual cycle would be expected to ovulate about 14 days before their next period. (Here's an article about why pinpointing the ovulation date can be confusing.) After estimating when they ovulated, people who are TTC track time in days past ovulation, or dpo. In IVF world, it seems (from reading message boards and such--I haven't read anything super scientific) that retrieval day and ovulation day are roughly the same.

With that in mind, a person with a 28-day cycle would have missed their period (expected at 14 dpo) around 15 dpo. I've been thinking about when a person becomes "actually pregnant" and coming up short. Thus far, the day after a missed period seems reasonable. My 15dp5dt is approximately 20 dpo, so we have cleared that hurdle. Most people who are just looking for a missed period would have received a positive test by now and felt pregnant, so why not me too? I even said, "I'm pregnant" aloud to myself in the car yesterday, and it felt kind of real, kind of fake. I'm hoping that the numbers continue to increase and that I'll find myself able to celebrate and not feel like a pregnancy impostor.

With repeated blood tests, it's difficult to settle in and enjoy the moment, but I'm doing my best. Still, it feels incredible that we have made it this far. I think the affirmations are helping! I have also been writing down five things I am grateful for each day. It's helping to get my mind right for sure. I'll be praying, keeping my fingers and toes crossed, saying my affirmations, and doing my breathing exercises until I get the next round of blood results. Join me!

Something that made today great: Good girl talk before bed :)