Yesterday was really difficult. It started with not getting restful sleep on Saturday night and seemed to snowball. I had plans to go to a brunch book club with Elena, and I wanted to look cute for the loose Derby Day theme we had planned for the brunch. I got up and weighed myself only to find that I am currently tied for my highest weight ever. I'm under instruction from my RE to "eat eat eat," and I know that numbers on a scale don't tell a full story of health, but that put me in a bad headspace. Then after I got out of the shower, I found myself staring at my bruised, enlarged stomach. Generally, I would guess that I feel more confident about my body and myself than the average person. Yesterday, though, I felt defeated by it all.

Compared to some stories I have read, I have had a pretty easy time with stims and procedures. The results of the last cycle were a big blow (as I discussed in detail previously), but we know that I respond to medications, I can make eggs, and Richard and I can make embryos. I'm gaining weight and I miss running hard and/or for long distances, but it could be so much worse. As my RE said, every cycle is different, so we just have to hit the right one. 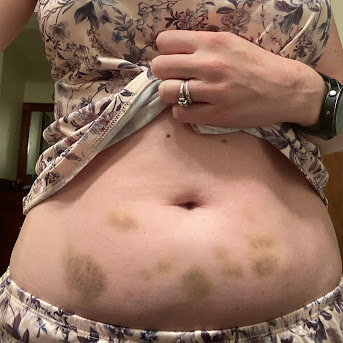 After book club, I spent most of the rest of the day worrying about this cycle potentially turning out like the last one. Even if we had some normal embryos, I have never been pregnant, so then I worried about what would happen if we used all of our embryos without ever finishing a pregnancy? The thoughts overwhelmed me, and I spent a lot of last night alternating between reading devotionals and crying. It felt kind of like I used to feel every month when we'd try, I'd think I could maybe, possibly be pregnant, and then my period would come. At some point, I pulled myself together to finish proposals for the ASHE conference in November, and then I went to bed.
Once again, I did not sleep well last night. We had to be at the hospital at 8:30 this morning, but I woke up early to shower and at least make sure I had clean hair and a fresh booty. (Success!) The ride to the hospital was quiet, and the anxiety from Sunday spilled over into today. Whereas everything was new last time, I found it difficult to be hopeful about a different outcome....even though every cycle is different.
We got checked in, and they whisked Richard off to provide his sample. By the time he was finished, I was in my gown, and it was almost time to start my IV. I don't have great veins, and it took two tries to get started. Meanwhile, I was crying because I was anxious about the outcome of the surgery, not the needle. The nurse asked if I wanted some medicine to calm down, but I told her I was fine.
In the middle of my breakdown, my RE came to say hello, so that was a delight. He did give me some encouragement by mentioning that the embryologist said the eggs I made last time were great, and he still had hope for us. That made me feel a lot better. After consulting with Richard, I agreed to have a little bit of medicine to calm down, so they brought me a little bit of Versed to go through my IV and take the edge off. It seemed to help, and I didn't even cry when I had to tell the nurse how much I weigh. We took this photo that I proceeded to put on social media without realizing how much I look out of it. At least my mask was covering most of my face. I blame the Versed and the lack of sleep, but now this photo will probably end up framed in our house someday. 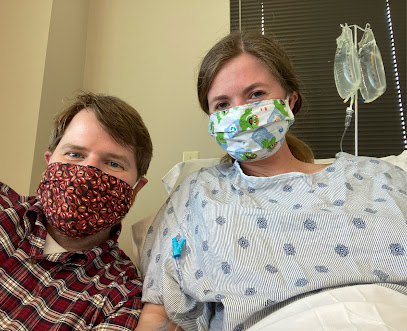 The procedure went as planned, and we retrieved eight eggs! My RE came to tell me the numbers while I was still coming down, and I had a bit of trouble counting his fingers. By the time I had my snacks--Scooby snacks and a Coke--we'd already gotten word that seven of the eight were mature. It's expected that about 80% of the eggs retrieved will be mature, so we were happy to not fall below that range. Tomorrow, we will find out how many fertilized with ICSI. We expect 80 percent again, but I'm hoping that all seven will make it. I guess I am a little greedy, but also, every cycle is different. 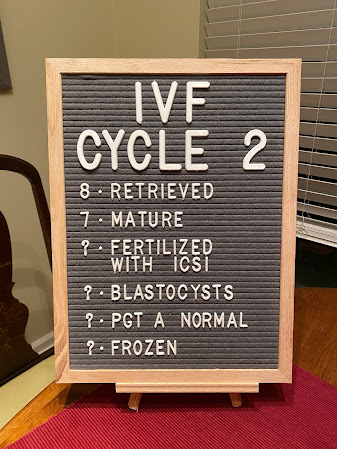 We still have a long way to go before we know how the cycle turns out, but our work is done. Now we wait and try not to worry.
Something that made today great: We retrieved twice as many eggs as the last cycle!
Time I woke up: 7:00-ish
Posted by Kimberly R. Davis at 11:56 PM