Sometimes I am tough, and sometimes I call things early and go to McDonald's. Today was one of the latter.
The Louisiana Ultra Runners Christmas Eve run was a good time, but it was cold and windy! Lake Ponchartrain was not playing around today. The route involved an 11.5-mile loop followed by a 16-17 mile loop, but my new friend Gwyn (my running buddy for the day) and I decided that we'd bow out after the first loop rather than continuing to take a beating from the 20 mph winds for another 3-4 hours.
On the way home, I stopped at McDonald's. After taking a hot shower, I promptly plopped into bed and took a fantastic post-run nap. One of my favorite things about getting my run done early, especially on a cold day, is taking a hot shower followed by a cozy nap.
Tonight has been much more productive than the afternoon was. I baked, did laundry, and wrapped presents, and I have almost watched all of the Christmas/holiday episodes of The Office. I might have to finish them tomorrow, as I don't want to stay up so late that Santa Claus skips my house! 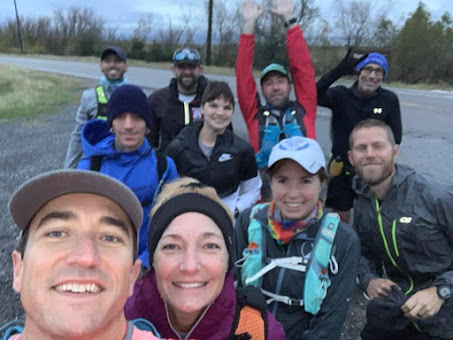 Something that made today great: Cooking and eating holiday treats.