I've written a little about my first marathon before, but what I might've not touched on is that I am a run/walker. When I race, I don't run the whole time. I will likely be a run/walker forever, or at least until I have to drop to just walking...hopefully, that won't be until I'm at least 102, though.

When I was training for my first marathon, I joined the Natchitoches Run/Walk Club, which is where I learned the magic of run/walk. I purchased a pink Gym Boss interval timer to help with my training, and that thing has been my best non-human running friend. My Gym Boss has been with me for hundreds of training runs and dozens of races since 2013. I made one of my best running friends, Tim, after we saw each other at two races, and he couldn't shake the beeping noise of the Gym Boss as we leapfrogged through the 2016 Revel Run 15K and the 2016 Autumn Breeze 10K, both in Shreveport. Without my pink Gym Boss, I wouldn't have had Tim as a friend, and my life would be sadder.

In the picture,  I am wearing the Gym Boss on my wrist, but sometime in 2016, I decided that I had too much stuff on my arms. A watch, Gym Boss, and handheld water bottle were plenty, but sometimes I even wore an armband if I was running with my phone. Look at this hot mess on my arm in the 2016 Louisiana Marathon. 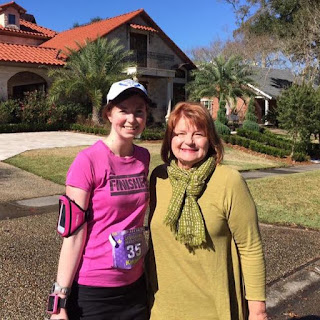 At some point in 2016--before I met Tim, I think--I ditched the wrist band and started wearing my Gym Boss clipped to the waistband of my bottoms. Decluttering my arm was a helpful step, but I could still run my intervals. Life was good.

Flash forward to today when I ran the Mobile Marathon with my friends Elena and Sandra. We were out for 26.2 miles of smiles, and our goal for the day was to finish before the 7-hour cutoff. I had my Gym Boss set for intervals of running 60 seconds and walking 90 seconds, and everything was just fine. It was a bit chilly, but better chilly than hot or raining, so really we had an ideal day for a marathon. As we ran, we thanked the volunteers and police officers, drank plenty of water and Powerade, and admired the historic homes we passed along the course.

Around Mile 10, we decided to stop for the porta potty because our hydration had been so on point. Everything was going great, and I was going to be out of the porta potty in record time...and then it happened. I stood up, started pulling my pants up, and then I must've bumped something or pulled too quickly because my Gym Boss flew off of my pants and into the blue sea of the porta potty.

From next door, I heard Sandra ask, "What happened? Did you drop something?"

"I threw the Gym Boss in the toilet! I can't even see it anymore!" I answered.

While I didn't want my Gym Boss to suffer a slow and painful death, I do hope that it got a few more minutes of beeping before the water seeped into the battery compartment. We had a good laugh about what might happen if the next person came in to use the bathroom and the Gym Boss beeped from the deep waters of the toilet.

Other than the loss of my beloved Gym Boss, the race was great, and we finished in plenty of time. I have now run a marathon in ten different states, which means I qualify for membership in the 50 States Marathon Club! That's kind of neat. My first marathon of the year is in the books, and I had such a good time traveling and hanging out with some of my greatest running buddies. I have an ambitious running schedule for the year, including the Louisiana Marathon next weekend and the Red Dirt Ultra--my first 100K--on February 2. I'm much more excited than I am scared. It sure is fun to do crazy stuff with your equally crazy friends!

Something that made today great: The volunteers and race staff for the Mobile Marathon were so kind and supportive!
Time I woke up: 6:20 am